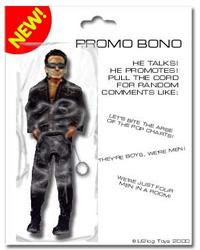 It doesn’t take long for the merchandising to kick in. Meet the limited edition doll made especially for the release of All That You Can’t Leave Behind: Promo Bono

It’s called Promo Bono and media outlets around the world are claiming this promotional puppet of the U2 singer has been sent to ‘VIP reviewers’ of the band’s new album.

Well, we didn’t get one. And, on closer investigation, turns out no-one else did either.

The spoof was sparked by a tongue-in-cheek item on fansite U2log.com – complete with image of said doll – which claimed that if you pulled a cord on the back of the pint-sized puppet, it would respond with soundbites such as “let’s bite the arse of the pop charts” and “they’re boys, we’re men”.

The doll was allegedly inspired by a comment made by Bono at an Australian press conference in 1998. When asked whether the band planned to market action figures of themselves, he replied: ‘They’re actually in the factory mating with the Spice Girls dolls and they haven’t made it onto the High Street.’