While it’s been quite some time since we’ve made mention of Bono and mullets, and that’s probably a good thing, we have now been introduced into a new era of hairstyle. Thanks to those recent Harvard photos we reveal a section of mullet that now hangs from the front. 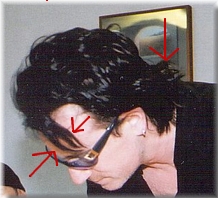 What could almost be considered as a Combover-Mullet, we wonder if in a few years time Bono may resemble something like this.