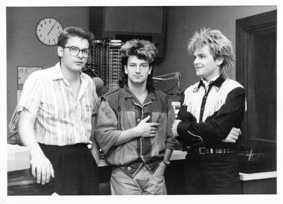 In their hey day, Welsh band The Alarm suffered from U2 comparisons. There wasn’t an interview, or review, that wouldn’t mention their Irish contemporaries. Though succesful in their own right, they didn’t quite make it, and the band fizzled out at the start of the 90s. Now front man Mike Peters has reformed the band as The Alarm 2000 (though apparently without any of the other original members), they’ve toured and have recorded a live album which is reviewed on PopMatters.com. Ten years have passed, and nothing has changed – they’re still being compared to U2: While they’re even less likely to be the next U2 now than they were 15 years ago, their style of arena rock has aged fairly well even considering their tendency to lean on heavier production.

Though probably not their greatest song… we’ve always loved Rain in the Summertime.

8 thoughts on “Big Music from Wales”