AP: President Bush has proposed a three-year, $5 billion program to provide aid for developing nations. Cause Bono told him to. We can but grin, shake our heads in disbelief and mumble ‘jaysus, it’s surreal, so it is’. 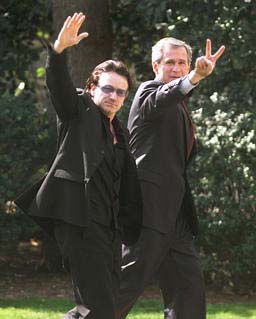 { The leader of the free world, and Mr Bush on their return to the White House from the Inter-American Development Bank }

President Bush’s proposal is for 2004, and subject to congressional approval. He also urged development banks to drop half the African countries’ debts by making them grants, rather than loans.