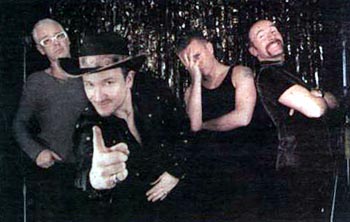 … a couple of words from star photographer Rankin about what he thinks is one of the best U2 photographs: ‘… I’ve got a really funny story about Adam. Cos Adam came later than the rest of them, that day. And I had shot them all individually first, cos I didn’t want them to know what I’m about – and I was like, Head down, chin out, you know. [ … ]

‘But Adam hadn’t been there. So they all get in the group shot, and I was going Right, Bono, put your feet like that, angle your head more, do this, do that – and Adam’s face was like (forms expression of fixed stony rage) – he could not believe that I was ordering these people around! And I was going, Adam, can you push your chin down. Adam. Please, Adam. And he was just ignoring me! It was really hilarious, it made me laugh so much. He was like, Who is this bloke? Who is this person telling me what to do? But, you know, U2 were just the best. He [ Bono ] is the best. He said the nices thing that anyone’s ever said to me. He goes, Rankin, you remind me of me.’

Full story in the latest issue of Hot Press.

30 thoughts on “If a picture paints…”