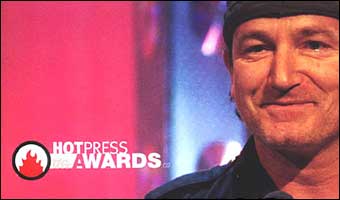 A rare, spec-less Bono’s on the cover of the latest Hot Press magazine, which covers the evening of the Hot Press Awards. Inside, you’ll find more pictures, and quotes by all the band members including The Edge’s infamous DVD remark: “The Slane shows meant as much to us as any shows we have ever performed… The DVD will be out by next Christmas.” Hot Press writes the Edge ‘quipped’.

Rick, of Northern Irish band “Ash” claimed: “I’m so nervous, but not as nervous as The Edge was making me, looking at me in that weird way, while I was playing.” To which Adam responded: “Edge has been giving me that look for years.”