The Antonov 225 was originally built to carry the Soviet space station. Today, the world’s biggest plane is carrying cargo just as precious. Taking off from John F. Kennedy International Airport in New York and touching down in the African nation of Uganda about 24 hours later, the Ukrainian aircraft will hold 80,000 shoeboxes filled with toys that will be distributed to children affected by HIV/AIDS. However, the shoeboxes going to Uganda and neighboring war-torn Sudan contain more than dolls, matchbox cars, and crayons; they contain love and hope. 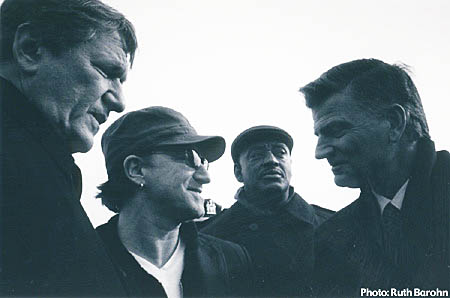 Since 1993 Operation Christmas Child has delivered more than 18.5 million shoeboxes to children in more than 100 countries on 6 continents. The project is part of Reverend Franklin Graham’s Samaritan’s Purse organization, which responds to the physical and spiritual needs of individuals in crisis around the world.

Millions of children, families, churches, schools, and other community groups pack each shoebox with toys, school supplies, clothes, and other items for children who otherwise would not receive anything for the holidays. Eighty thousand of the more than six million shoeboxes that will be delivered this season were being loaded at Hanger 12 on December 10, 2002.

The Brooklyn Tabernacle Choir sang and special guests Senator Bill Frist (R – Tennessee), Ambassador Richard Holbrooke, and Bono joined Reverend Franklin Graham (son of Reverend Billy Graham) to congratulate and thank the children for their efforts and to bring attention to the AIDS pandemic that is crippling the African continent. 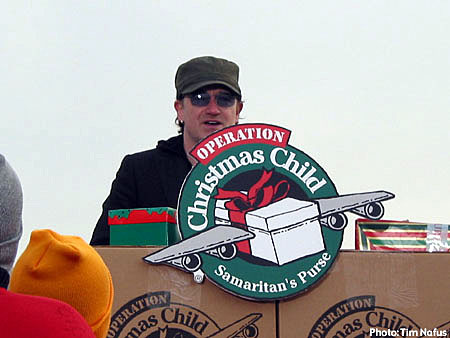 “Even in the age of terrorism, there is nothing more urgent than the war on AIDS,” said Holbrooke, who is now CEO of the Global Business Coalition on HIV/AIDS. “This isn’t just the worst health crisis in more than 600 years — which it is — it’s also a disease which attacks the social and political and economic and moral fiber of nations.”

In Sub-Saharan Africa, where AIDS is the leading cause of death, more than 11,000 children die weekly from the disease and currently more than 13 million children are AIDS orphans — a number that may rise to upwards of 20 million by 2010.

“As a physician, I was in Uganda just a few months ago and had the privilege of visiting families and children and HIV/AIDS orphans — over 14 million HIV/AIDS orphans in the world,” said Senator Frist, who is the only medical doctor currently serving in the United States Senate. “Innocent children who have this little, tiny virus that, ultimately, we will defeat. We will defeat that virus. But in the meantime, we can give that hope. We can accomplish meeting some of those dreams of those young children all over the world.”

One special shoebox that will undoubtedly fulfill a dream of one young girl in Africa was filled with love by 12-year-old, HIV-positive Lakeland, Florida native Lesley Clementi. Clementi, who was born with the virus, said that she wanted to make a shoebox for a child in Africa living with HIV/AIDS because she wants the children there to know that she knows what they are going through and she cares about them. “I want them to know there is always somebody out there who is going to love them and care for them,” said Clementi.

A teddy bear, toothbrush, toothpaste, crayons, a coloring pad, rings, and bracelets will reach one lucky young African girl, along with a very special note from Clementi in which she wrote, “I want to let you know that I care for you, and I always will no matter what happens in our lives. You are always going to have a friend. All you need in life is one, and here I am.”

Certainly a friend to the people of Africa is singer and activist Bono, who was clearly moved by the ceremony. “These children that are going to receive these boxes for Christmas…this may be their last Christmas. That makes me feel sick in the pit of my stomach,” said Bono.

Bono told the supporters, which included many church members, that the AIDS crisis brings the best out of the church with its response to help children suffering with HIV. “But if we’re honest,” said Bono, “it has also brought the worst out of the church — judgmentalism. A kind of sense that these people who have AIDS, well…they got it because they deserved it.” After a pause, he continued, “Well, from my study of the scriptures, I don’t see a hierarchy to sin. I don’t see sexual immorality registering higher on up the list than institutional greed or greed of any kind, actually…the problems we suffer from in the west. So, this is an important and defining moment for us, for the church, for our values, for the culture that we live in.” 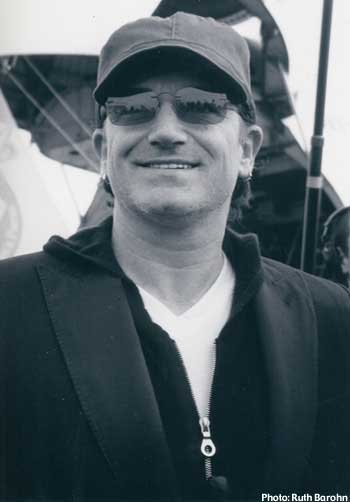 Bono was touched by the extreme care these children displayed in making the presents. “These boxes that are sent as gifts of love from all over the world would actually have so much more than just that. They would be the beginning of a new relationship where we say it’s not acceptable to let a child die when we have the drugs that can keep them alive,” said Bono.

“These are people who have a soul, people who are precious to God. I want to do everything that I can to reach them, to love them, to care for them, and to do everything we can to educate men and women about the dangers of HIV/AIDS and how it can be prevented,” said Reverend Graham.

Education also is necessary for citizens of the world’s greatest superpowers. Once armed with the facts on these issues, it is up to the public to pressure their representatives, as Ambassador Holbrooke pointed out: “We have to take the word back to Washington and around the world that this fight is everyone’s fight. You can’t just draw a wall around one continent.”

Bono spent the previous week spreading that message throughout the Midwest on his DATA organization’s “Heart of America” bus tour, where he encouraged audiences in colleges, churches, and truck stops to take action. “In Washington, they’re not afraid of rock stars and student activists. They’re afraid of church people and they’re afraid of mothers. Now when mothers and church people start hanging out with rock stars and student activists, then they’re terrified!” said Bono.

After laughter and applause from the audience, Bono once again got serious. So I think we have to send a message to Washington. The President of the United States is going to Africa in the New Year. We have a feeling this is on his heart. There’s people in the administration that really want to do something about what will be the defining moral issues of our times. If we could send a message that the American people care and, actually, doing this kind of thing that we’re part of today makes them feel more American.”

Although progress has been made in reducing infection rates in some countries such as Uganda, Bono warned, “All of our work is made meaningless in the face of this most wicked of plagues. I would ask you, pastors…I would ask you, politicians…I would ask you, the people of New York to rethink the way we look at this.”

As a plane roared overhead, drowning out Bono in mid-sentence, he lifted his arms to the air and shouted, “It’s a beautiful day!” as he did in the video for U2’s hit song “Beautiful Day.” With 80,000 gifts of love and hope on their way to the children in need of it most, yes, Bono, it certainly is a beautiful day.