ShowBiz Ireland reports that U2 had its annual Christmas party last Friday at the Clarence Hotel. All members of the band except Larry Mullen Jr. showed up to celebrate the holidays with the staff of Principle Management.

U2Exit.com is offering RealAudio of Bruce Springsteen, Bono, and Dave Stewart performing “Because the Night” last month in Miami, Florida.

Joe Strummer, of the band The Clash, has died of a heart attack at the age of 50.

Strummer had recently been working with Bono and Dave Stewart on their song ‘48864’ for the Mandela-SOS album.

Bono, talking to Press Association, said: “The Clash was the greatest rock band. They wrote the rule book for U2. Though I was always too much of a fan to get to know him well, we were due to meet in January to finish our Mandela song with Dave Stewart. It’s such a shock.”
(source: CNN, Reuters, NME, The Guardian)

If you’re in need of some of that Seasonal spirit, U2video.com might answer your prayers. It’s Christmas, baby, please come home. 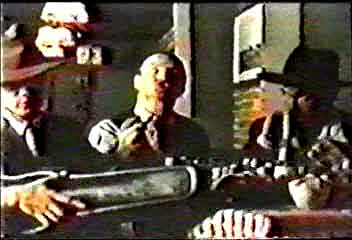 U2star.com have dug up some rare U2 footage in which the boys have a go at playing The Godfather. We remember hearing of this video as an industry only release, made to thank an American record mogul (“Lou”?) for his work in pushing Joshua units. Correct us if we’re wrong.

And now we would like to present to you useless fact No. 4566. In a recent U2 edition of NME magazine it was revealed that one of Bono’s top 5 favourite television shows is the Classic Australian drama Skippy the Bush Kangaroo. With some of our team here being Australian, we are very touched by his recognition of classic Aussie Tele.

Finally, after years of waiting, Bono has made the pages of Teen Hollywood. Unfortunately it’s by exposing his fear of heights, but he’s there none the less. Luckily, Ashley Judd was there to save the day. Judd joked from above, “Oh good. I can act out my favourite fantasy…’Bono, save me!'”

Details for “Mandela SOS,” the concert at Robben Island to benefit AIDS charities, have been announced.

Bono, Dave Stewart (The Eurythmics), and Joe Strummer (The Clash) will perform a song they wrote together titled “48864” at the February 2 concert Nelson Mandela is sponsoring at his former prison. Stewart, who is musical director for the benefit concert, said the song focuses on Mandela’s courage in speaking out against apartheid. “48864” was Mandela’s prison number during the apartheid regime in South Africa.

According to concert organizers, 2,500 tickets will be distributed for the event at Robben Island through radio promotions and special invitation. Ned O’Hanlon, the concert’s executive producer, said that a simultaneous concert will be held in a Cape Town stadium, where the Robben Island concert will be projected on a large screen. Several of the musicians will perform at both venues.

The concert will be broadcast live on the Internet at www.mandelasos.com and possibly televised.

U2 have been nominated for a Golden Globe award in the category of Best Original Song in a Motion Picture for “The Hands That Built America” in Martin Scorsese’s film “Gangs of New York.” Other nominees in the same category include Madonna, Paul Simon, Hans Zimmer with Bryan Adams and Gretchen Peters, and Eminem. The Golden Globe award winners will be announced on January 19, 2003.