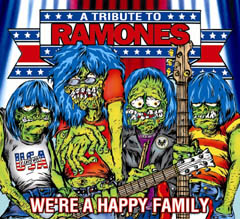 Columbia Records has provided us with the cover image of the upcoming “We’re A Happy Family” album and a press release about the long-awaited tribute album.

New York – January 15, 2003–DV8/Columbia Records will release the eagerly-awaited star-studded We’re A Happy Family – A Tribute To Ramones to stores on Tuesday, February 11.

The initial run of We’re A Happy Family – A Tribute To Ramones comes packaged in a deluxe limited edition digipak designed by Rob Zombie with a 28-page booklet featuring rare photos and an appreciation of the Ramones penned especially for this collection by the best-selling novelist Stephen King.

“I think it’s a good blend right there,” says Johnny Ramone, who consulted with the artists involved with the album and made final selections for material included. “Some bands chose to record it in a Ramones style and other bands interpreted it into their own style. I think everyone did a great job.”

“The Ramones are in my opinion the greatest American rock band. For over two decades they remained true to everything that rock ‘n’ roll needs to be – loud, fast and stripped down to the core,” observes Rob Zombie. “The Ramones will forever be cemented in my brain as four teenage punks in black leather and blue jeans ready to crack your skull with a baseball bat.”

Though not the first punk rock band per se, the Ramones were inarguably the most influential. Formed in 1974, later emerging from New York City’s diverse and vibrant underground music scene, notably the legendary Bowery Bar CBGB’s, the Ramones were the first New York punk band to sign a recording contract, releasing their self-titled debut album in 1976. Touring the United Kingdom for the first time that year, the potent sound and image of the Ramones galvanized a generation of frustrated English and Irish youth who quickly coalesced into a UK cultural phenomenon with bands like the Sex Pistols and the Clash joining the Ramones in defining the perimeters of punk rock. As the sound and attitude of punk, based primarily on the Ramones template, spread outside of the incubators of New York and the UK, first dozens, then hundreds, and, by the 1990s, thousands of loud, raw young bands were transforming the musical and cultural landscape with the loud fast rules first written by the Ramones.

The impact of the Ramones began to reach into other areas. In music, pop acts began taking the Ramones insistence on brevity, melody, rough and concise instrumental textures and ironic comic lyrical compression to heart while heavy metal groups began to speed up their tempos and shorten their guitar solos, dressing in black leather and torn jeans.

The lifestyle accoutrements — the love of comic books, horror movies, and second hand clothes — embodied by the Ramones infiltrated mainstream culture, especially the world of fashion. Today, whenever one of our funkier “superstars” from the worlds of film, literature, fine art, or music appears at a public function wearing a thrift-store t-shirt with a comic book logo or strategically ripped denim, homage is being paid to the Ramones.

For two decades, the Ramones were a consistently solid live draw playing to packed houses the world over, inspiring countless young bands to embrace the Ramones musical philosophy and attitude, often with enormous success. On We’re A Happy Family – A Tribute To Ramones, some of those debts are being enthusiastically repaid by some of the Ramones foremost, and highly visible, musical disciples.

“The Ramones made people want to get involved and make music,” observes the Offspring’s Dexter Holland. “People thought, ‘This is something I can play. It’s not like Kansas or whatever, when you need to go to GIT (Guitar Institute of Technology) before you start a band.”

“If it wasn’t for that particular style of guitar playing and the speeding up of the beats,” offers Metallica’s Kirk Hammett, “Metallica would not sound like we do today. Plus, they also showed me how cool one could look in just a leather jacket and denim.”

When the Ramones front man, Joey Ramone (nee Jeffrey Hyman), passed away on Easter Sunday, 2001, U2 dedicated three songs to Joey at a subsequent concert in San Diego. The Irish foursome had made their devotion to the Ramones well-known for some time. At a show at New York’s Irving Plaza in late 2000, Bono had told U2’s audience, “We got started on the poetry and rock of New York City. The music of Patti Smith, Television — but more than anybody, the band that got us started when we were fifteen, sixteen — Larry was fourteen, still is — was the music of the Ramones.”

“This record is dedicated to the memory of Joey and Dee Dee, members of an incredible band that I had the privilege of managing for over two decades,” said the album’s Co-Executive Producer and Ramones manager Gary Kurfirst, “with a special thanks to Johnny who un-retired just in time to be the driving force behind this project.”

Partial proceeds from the sales of We’re A Happy Family – A Tribute To Ramones will benefit the Lymphoma Research Foundation, New York City.

We’re A Happy Family – A Tribute To Ramones
Track Listing

3.”I Believe In Miracles” – Eddie Vedder with Zeke

7.”The KKK Took My Baby Away” – Marilyn Manson

8.”I Just Wanna Have Something To Do” – Garbage

10.”Something To Believe In” – The Pretenders

18 thoughts on “A Tribute Record That Doesn’t Suck”