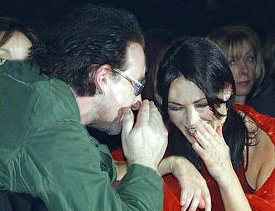 The weekend tabloids were full of gossip from the Brown Thomas International Fashion Show and its after-show party. The Sunday Mirror reports that Victoria Beckham (aka Posh Spice), who is in Dublin recording her new album, snubbed the charity fashion show, disappointing organizers who were hoping for a show of support. Apparently, the event was not posh enough for the Posh One. Sharon Corr (above, giggling with Bono) thought otherwise.

END_OF_DOCUMENT_TOKEN_TO_BE_REPLACED

If you think like JJ72 singer Mark Greaney, you have a connection to God if you have met Bono.

“I’ve met Bono a few times, so I’ve got a natural link to Godliness. I have touched a prophet,” Greaney told Undercover Music.

If Greaney is correct, U2 collections may qualify as holy relics in the future.

Bono contributes an article to today’s Washington Post: “I’m in the business of making music; I know about screaming crowds. President Bush is in the business of making history. I’m convinced that if he stands before Congress tomorrow night and declares that Africa’s AIDS epidemic is an emergency, people watching in America and around the world will stand up, cheer and volunteer to help.”

U2star.com have put up a video of U2 playing A Day Without Me at the Leixlip festival in Ireland, july 27, 1980. Beware of ancient video effects!

Two of U2’s longtime collaborators, the production duo Lanois and Eno, are in the news this week. Daniel Lanois’ new solo album “Shine” (his first in ten years) is scheduled for release in April on the Anti label (more at daniellanois.com), while Eno contributes a piece to Time Magazine. (links via Bernard and Paul)

Kite Publishing.com has a 14 minute WMV video from one of the New York Elevation shows where U2 invited (they say invented, but I don’t think U2 invented this) the New York Police/Fireman onstage. Get it while you can.

MTV2 is asking music fans to choose the artist they think has the greatest voice in music in the last 22 years. Bono is among the 30 artists fans may vote for. MTV2 will tally the votes and announce the results in a show titled “22 Greatest: VOICES.” Vote now!

Are you a NYC-area U2 fan? MTV2 might want to film you talking about how Bono’s voice has influenced or inspired you for its show.

END_OF_DOCUMENT_TOKEN_TO_BE_REPLACED

Launch reports that “48864,” the song Bono cowrote with Dave Stewart and the late Joe Strummer, will appear on an AIDS benefit album due in the fall. The song was set to be performed by Bono, Stewart, and Strummer at the Mandela SOS concert in South Africa, but Strummer’s untimely death and the cancellation of the benefit concert changed that plan.

Today’s Irish Mirror reports the Brown Thomas International Fashion Show, which Ali Hewson helped to organize, raised more than EUR700,000 for three Irish children’s charities. Ali celebrated the success of the show by throwing a huge after-show party with her husband. All the models and stars who participated in the fashion show — including The Edge and Larry Mullen — partied the night away at the Clarence Hotel.

When asked what he thought of his friend’s performance in the fashion show, Larry Mullen told the Irish Mirror, “I think The Edge was brilliant on the catwalk tonight. I did it last year and I jumped off the stage. Now I’m banned. But as much as I love the boys here tonight. You can’t beat the girls.”