After struggling with how best to report on the opening of the Rock and Roll Hall of Fame and Museum’s U2 exhibit, titled “In the Name of Love: Two Decades of U2,” I decided not to write a report and instead share a personal letter that I wrote to a friend in England in which I summarize and review the exhibit.

All the accompanying photos were taken by Ruth Barohn for U2log.com with permission of the Rock Hall. Photography is not normally permitted at the museum. -CT

Dear RM,
I’m on an airplane heading back to Chicago after spending the weekend in Cleveland. The Rock Hall exhibit opened successfully and without incident.

I should be writing a report on the exhibit for U2log.com now, but I can’t think of an interesting approach. “The Rock Hall had this and that, blah-blah-blah…” It would be tedious to describe everything in the exhibit. I don’t want to write an overly detailed report and spoil it for those people who are planning to go to the exhibit in the future. Perhaps I’ll get inspired when I get home…

I know you don’t plan to trek over the ocean to see the exhibit, so I’ll give you a crackerjack summary and review — from one U2 fan and friend to another. 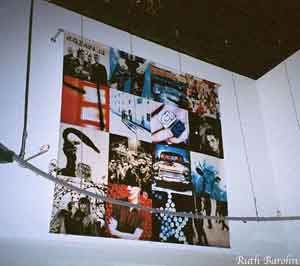 The exhibit takes up three floors of the Rock and Roll Hall of Fame and Museum, which is an architecturally interesting building that sits next to Lake Erie. The first floor of the exhibit presents U2 through the decades with visual arts. A movie theater showing Rattle and Hum, Red Rocks, ZooTV Sydney, and Making of the Joshua Tree and an Anton Corbijn photo collection constitute the visual arts portion of the exhibit. Jim Henke, the museum’s curator, said Anton was in Cleveland two weeks before the exhibit opened to set up the photos himself.

As I looked at Anton’s photos, I thought “Bono Love Fest.” Bono was the focus of all the photos — even those showing the entire band. Clearly, Bono is a favorite subject of the photographer…or the only one who cooperates when Anton pulls out his camera.

The photos that fans seemed to enjoy the most were one of the band in drag and one of them standing together at the door of ElevationAir. My favorite was one of Bono with a donkey nuzzling at him. I looked at it and thought “the two asses.” No, I’m joking. The photo had a gentle quality that appealed to me.

In May, Anton’s photos will be replaced with a graphic design collection from Four5One that will showcase album cover designs, t-shirt designs, and other graphics. At the media preview before the exhibit opening, Henke talked about when he traveled to Dublin to meet with Steve Averill to discuss the exhibit. Henke said he was impressed to learn that there were 40 different album covers designed for “Pop.” Let’s hope that the Rock Hall doesn’t chose to display all 40 designs when the Four5One collection goes up. 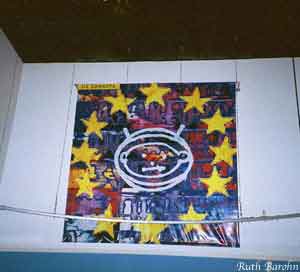 The second floor of the exhibit presents U2 from the early years to the “Pop” period. Notable items include a rejection letter from a record company addressed to Mr. Hewson; a 1980 concert setlist; a birthday letter to Larry from the ex-members of the Larry Mullen Band; a War tour book (View image); handwritten lyrics to several songs including “Out of Control,” “Another Time, Another Place,” “The Ocean,” and “Bad”; an early t-shirt designed by Larry (View image); several copies of de Voibe (the tour newsletter); tour passes and tickets; early press releases and concert flyers; Bono’s Stetson hat (as seen on the “Rattle and Hum” cover) and harmonica; and tons of records, posters, magazines, and fanzines (View image). Also on the second floor are Larry’s first drum kit (View image) and Bono’s first guitar (View image). Ruth said Bono’s guitar looked like something you would see Don Ho play, which cracked me up. (See DoHo.com if you don’t know who he is.) 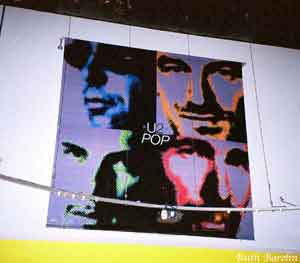 Next to the stairs leading to the third floor of the exhibit was a wall-sized enlargement of one of Otto’s photos from the Elevation Tour. It’s nice that the Rock Hall allowed fans to contribute to the exhibit. David and Oli (aka “the Crazy Collectors”) contributed quite a bit of stuff, as did my friend Mary, who has been involved in college radio for ages.

Other notable items on the third floor include animation cells from the “Hold Me, Thrill Me, Kiss Me, Kill Me” video; PopMart stage design plans; Evil Edge’s tunic and Evil Bono’s jacket from the “Elevation” video; Salmon Rushdie’s handwritten lyrics to “Ground Beneath Her Feet” in script; and Brian Eno’s production notes from the recording sessions of “All That You Can’t Leave Behind” (View image [Eno’s notes at far right]).

I’m not sure if I completely understood what Eno’s notes described. They seemed to be a mix of his thoughts, possible song titles, editing instructions (e.g., “sing higher” and “Edge add ‘tear’ guitar”). It would have been nice if there was some explanation of the notes, but perhaps it’s best if I don’t understand Brian Eno.

My favorite item in the entire exhibit is probably the strangest item: Daniel Lanois’ shoes that he wore during the recording of “All That You Can’t Leave Behind” with a letter of explanation. He wrote that he never took the shoes off during the recording sessions and that they symbolized both consistency and dedication. Apparently, the band ridiculed him for wearing the ugly shoes every day. Lanois’ reply to them was the shoes were “good enough for Michael Jackson, good enough for me.” (The shoes were similar to the loafers that Michael Jackson always wears.) I appreciate that Lanois put some thought into what he could contribute to the exhibit and that, in the end, he chose to send something that was both humorous and symbolic.

Pretty much everyone associated with the band contributed to the exhibit — Paul McGuinness, Willie Williams, Steve Iredale — you name ’em, they sent something. The team from Dreamchaser contributed videos showing U2 through the decades. They were shown on two floors of the exhibit. 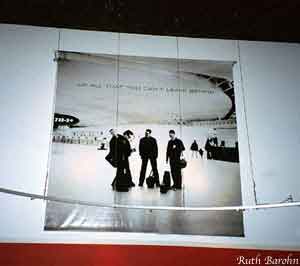 I made a point of asking a lot of people going through the exhibit what their favorite item was. Most of the old-timers thought the handwritten lyrics were cool. The younger crowd commented on the tour outfits. Henke said his favorite item was the Super Bowl jacket.

There were special moments at the exhibit opening too. Henke was treated to a surprise from U2 as he was giving a speech to museum members. The 87th Cleveland Pipe Band marched through the museum entrance and played an Irish tune called “Minstrel Boy” for Henke (View image), then read aloud a statement on behalf of the band in which they thanked him and apologized for not being there. The pipe band provided a rendition of “Wearing of the Green” before they marched out.

My special treat was getting to meet and spend time with Jane Scott, who is a distinguished, Cleveland-based music journalist. At 84 years old, she is the coolest of cool. She retired just last year. Amazing! This woman toured with the Beatles and has interviewed every major artist you can think of. She had a lot of stories, and I hung on to her every word. I got to hear about when she interviewed Michael Jackson when he was 8 years old; her impressions on Jimmy Hendrix, Bob Dylan, and Bruce Springsteen; and her opinion on which artists are the most difficult.

Jane also described the time she went to see a young band called U2 at the Agora in Cleveland in 1981. She said that it was always strange how some artists begged for her to come and meet with them when they were struggling to make a name — but once they became successful, they didn’t have time for her. She said U2 always treated her with the same respect and made time for her no matter what their status was.

It’s a shame that you couldn’t hop on an airplane and join us at the exhibit opening. There was so much stuff and so many familiar faces. I’ve only described a small amount of what was there. The exhibit is really a must-see for every U2 fan.

Photo slideshows by The Plain Dealer, Cleveland.com, and the Rock Hall