In today’s The Sun, Bono writes an article on war on AIDS. Read it here.

Talking about the new album to VH1, Bono’s quoted saying:

“It’s full-on, a full-throttle record. It’s like punk rock made on Venus. It is a mad sound The Edge is making. People are saying, ‘Bono, people are sick of you. You’ve been around, you’ve been winning all these awards. You have to go away for a while.’ This record is so good that it won’t even matter that people are sick of U2. And by the way, I’m sick of Bono 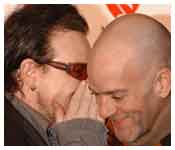 Some details, pictures and reviews of Bono and The Edge’s appearance at the MusiCares Person of the Year tribute honouring Bono on Friday at the Marriott Marquis Hotel in New York, are available from U2tours.com.

You can now watch some video of the evening provided by Grammy.com.

A number of artists performed U2 songs. Thanks to Matt for providing us with a full set list:

END_OF_DOCUMENT_TOKEN_TO_BE_REPLACED

Christianity Today dives into the enigma that is Bono, with no less than three articles concerning the singer appearing in their magazine this week. Bono’s American Prayer takes a look at who Bono is, where he’s coming from and what he’s been doing. In the meantime it raises the question: ‘Is he or isn’t he?’

‘Pop music with brains’ looks at U2’s music. Everything after The Joshua Tree is deemed unamerican… unchristian: “…during the 1990s Bono seemed intent on deconstructing his supposed “holy stature,” often behaving in ways that many evangelical Christians found distressing.”

END_OF_DOCUMENT_TOKEN_TO_BE_REPLACED

“It’s not about dreaming, it’s about doing. You start with your imagination like John Lennon did, but then you have to walk out onto the street and actually make it happen. You can’t fix every problem, but the ones you can, you must if you’re the overdog,” says Bono, explaining his commitment to the issues of third world debt and AIDS in Africa, in an interview with Hollywood Reporter.

“Zeal, charm, audacity and bravado” are the skills Bono possesses, writes Edna Gunderson. The USA Today music critic recently interviewed Bono in Dublin for a Grammy Magazine feature that underlines why he is being honored by MusiCares this evening. They discuss everything from U2’s new album to Bono’s charitable works to the meaning of success.

This morning around 11 a.m., Bono and Edge arrived at NBC Studios with Paul McGuinness and Dallas Schoo to film an appearance on the TODAY show. After a brief interview with both Matt Lauer and Katie Couric, Bono and Edge performed “The Hands That Built America” several times. After the filming was completed, Bono and Edge posed for photos with NBC staff before they left around 12:45 p.m.

Speaking to fans outside NBC Studios, Dallas said that the band have been working hard on the new album, which has a working title. “But the title escapes me at the moment,” Dallas teased.

Bono and Edge’s performance and interview will air on the TODAY show on February 26.

Bono is “delighted and humbled” to be nominated for the Nobel Peace Prize, a source close to U2 has told The Mirror. “Bono doesn’t see his work fighting AIDS or having Third World debt dropped as worthy of award, but he is thrilled to be put in the same group as some of the world’s most influential figures,” the source revealed.

Hot Press poll favourite Damian Rice has done a cover of I Still Haven’t Found What I’m Looking For. You can download this live recording from “Eskimo Friends” a fan site.

The Recording Academy is auctioning a pair of Bulgari blue sunglasses worn by Bono, along with a black leather case signed by The Man at eBay. The auction proceeds will benefit MusiCares, the organization that is honoring Bono later this week.