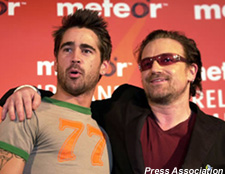 These were Bono’s words in his acceptance speech for the Humanitarian Award at the 2003 Meteor Awards, which took place at The Point Depot in Dublin on Monday evening.

In his speech, Bono announced that the 100,000 EURO prize money would be split between GOAL and CONCERN, two established Irish charities that have carried out relief work in Africa for well over twenty years.

Commenting on the sum of money involved, Bono mentioned the fact that it is the equivalent of 273 years’ salary for some of the people represented by his causes.

The award was presented to the singer by bad boy Irish actor and Hollywood success story Colin Farrell. In acknowledging receipt for the presentation, Bono commented that some of the Drop The Debt people were after Farrell to “pay his outstanding bills at [Irish nightclub] Renards.”

Before the presentation, a short film compilation of Bono’s relief efforts and meeting with heads of state was played. Included were tributes from Bob Geldof, Irish Prime Minister Bertie Ahern and Bill Clinton.

Collectively, U2 later beat off the competition by a number of Irish groups including Ash and JJ72 to pick un the award for Best Group. Bono acknowledged the greatness of the other nominees by saying this year it was a little bit more nervous for U2 than others. Edge reiterated that winning Best Group is what matters, as “that is what we are, a group.” Meanwhile Larry admitted “awards from our hometown are always an extra bit special,” whereas Adam used the opportunity to thank Sheila Roche.

The band also entered the pressroom for a conference. The questions mainly fell to Bono. Asked about the peace crisis in the north of Ireland and the impending war in Iraq, he refocused on the issues close to his own heart and asked, “What about the war on AIDS? Is the life of an African person — a black person — worth less?”

Bono also had a go at one tabloid journalist for alluding to rumours that he had bought a new pad in New York. Before eventually conceding that the tabloids are now running helpful features on the debt relief and aids crisis issues that Bono has been raising, he confirmed that U2 never were about being fodder for the tabloids.

Asked about their remaining goals after reaching yet another height in their career with the award successes, Edge said he would like to play for a winning Mexican football team, whereas Larry said he’d like to be acknowledged as the drummer and musician that he is and not “just the other fella!” in the group. Adam said he’d like to keep on pushing U2 to see how far it can go.

For the final award of the night Bono was onstage again. This time to present the Lifetime Achievement award to his peer and friend, Bob Geldof. “Geldof wrote the rulebook for what U2 do. He writes about the blood and vinegar of life, he is a true poet and a true Dub,” said Bono.

The evening ended with Geldof taking to the stage to reform with his legendary Irish band The Boomtown Rats for a once off set.

Other awards of the evening went to Mundy (who Bono lost out to for Best Male singer), Gerry Fish and the Mudbug Club, Carly Hennessey, John Spillane and Luke Thomas, while the Red Hot Chilli Peppers did well in the International Categories.

Photos of Bono and Farrell posing in the photo press room and a full transcript of the ten minute press conference will be available within the next few days.

The event is aired this Wednesday on Ireland’s Network 2 TV on between 9-11.15pm.