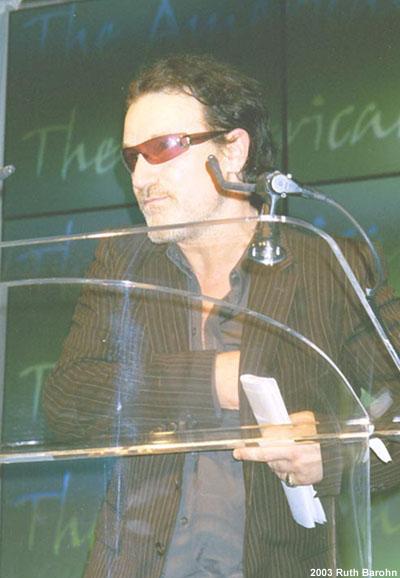 Saint Patrick and Bono have a few things in common. Both are strongly connected to Ireland; Saint Patrick as the country’s patron saint, and Bono as a member of the country’s most successful and celebrated rock and roll band, U2. Both took new names; Saint Patrick was born Maewyn, and Bono, Paul Hewson. Both can be called missionaries; Saint Patrick converted Ireland’s population to Christianity, thus ridding the island of paganism, and Bono converted the world’s indifference over Africa into action, thus helping to rid the continent of AIDS, debt, and unfair trade practices. This year both were celebrated on March 17th; Saint Patrick, all around the world, and Bono, in Washington D.C. at the American Ireland Fund’s (AIF) 11th Annual National Gala, as the organization’s 2003 International Humanitarian Award recipient.

On Saint Patrick’s Day 1987, the Ireland Fund and the American Irish Foundation merged to become the American Ireland Fund, which has become the world’s largest private, non-profit organization funding constructive change throughout Ireland. The organization is dedicated to raising funds to support programs of peace and reconciliation, arts and culture, education, and community development in both Northern Ireland and the Republic. The AIF has raised more than $150 million to support its growing grants program and has supported more than 1,000 worthy projects. Funds raised through this year’s gala will help to support the Special Olympics World Summer Games, which takes place in Ireland in June 2003.

The multi-leveled, grand atrium National Building Museum, with its marble columns and detailed archways, was the host of this black-tie (or rather green-tie) event. Two long, green banners hung straight down from the ceiling reading, “Tonight…We’ll build a bridge Across the sea and land.” Just as the AIF builds a bridge between the United States and Ireland, Bono builds a bridge between both sides of Washington’s political aisle. This was evidenced by those in attendance, which included powerful members from both the Republican and Democratic parties, as well as Nobel Laureates John Hume and David Trimble, Bush Administration officials, members of the diplomatic community, industry leaders, and celebrities from the arts and media.

Following a welcome from the President and CEO of the AIF, Kingsley Aikins, and the invocation by Father Bartley MacPhaidin, Chairman of the AIF, Loretta Brennan Glucksman introduced Tommy Thompson, the 2002 AIF recipient of the Distinguished Leadership Award. Thompson, the U.S. Secretary of Health and Human Services and chairman of the board of the Global Fund to Fight AIDS, Tuberculosis and Malaria, gave a humorous and touching introduction to the night’s honoree. 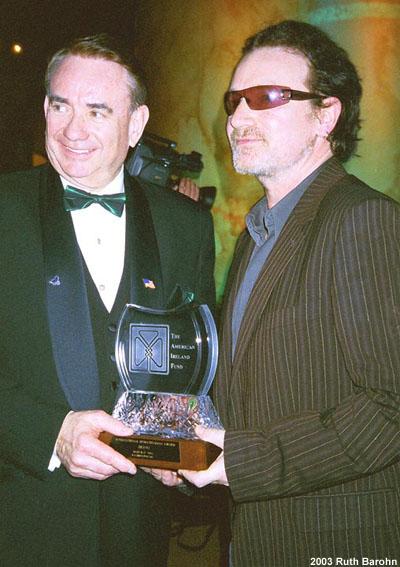 Bono took the stage to loud applause and cheering. He first told the heavily ancestral Irish gathering that he brought “great news from Dublin: The potato famine is over. You can come home.”

Bono first became active in helping Africa with 1984’s Live Aid concert, which compelled him and his wife, Ali, to spend a month volunteering in Ethiopia the following year. The experience in Ethiopia changed his life — one moment in particular.

“On the last day, a man handed me his baby and he begged me to take him back to Ireland because there he was going to live, while in Ethiopia, his son would surely die,” said Bono. “And in that moment, I became that most awful thing — a rock star who wanted to change the world.” Over audience laughter, Bono amended, “Have fun…and change the world.” He further credited the Ethiopian man as “the reason that I started going into Washington. He is the reason that I go and see Tony Blair, Jacques Chirac, Gerhardt Schroeder.”

Over the past several years, Bono has been lobbying these, and many other, world leaders to invest in the African people and continent. He has earned the affectionate nickname “The Pest” from the Bush Administration for his tireless efforts and knows that the United States, the richest nation in the world, must lead this fight and has to do more.

“I’m a fan of America. I love this country. Like all fans, I can be a critic. It’s like when your favorite rock band turns into a disco band. You get upset,” said Bono. He spoke of how his father shared his feelings about this country, saying, “I want to tell you that my father was a fan of America. His whole generation were fans. America is like the Promised Land for a lot of Irish people. Not because America liberated Europe, but because America helped rebuild Europe. That wasn’t just heart, that was smart. The Marshall Plan was a bulwark against Sovietism and the Cold War.” Bono implored that similar action is needed now for Africa. “We’re working for people’s lives here. Their lives depend on those dollars. The buck may stop here, but it goes a long way over there,” he said.