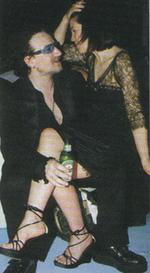 This photo was snapped at Mortons in West Hollywood during the Vanity Fair party — the party to attend following the Oscars. Us magazine (the source of our scan) reports that Bono and Ali “acted like newlyweds” at the party full of A-list celebs.

According to the magazine, the two also attended the Governor’s Ball, which immediately followed the Oscars ceremony. There they chatted with Colin Farrell and his pregnant girlfriend.

56 thoughts on “Bono and the Missus”