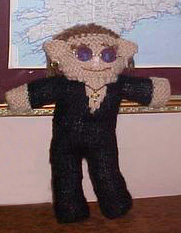 A Minnesota woman is helping sexually abused children in South Africa in an unique way: she’s knitting bears of her favorite singer.

Bono Bear is the creation of long-time U2 fan Anne, who was inspired to create the special bear while knitting traditional teddy bears for the Mother Bear Project.

The Mother Bear Project is a non-profit organization comprised of caring individuals who make knit teddy bears for South African children who have been raped. A shamanistic belief that AIDS can be cured by having sex with virgins has lead to a dramatic increase in the sexual abuse of young girls in Africa. The teddy bears that the Mother Bear Project sends provide support and solace for these girls who are cared for by the Child Protection Unit in Durban.

“Each bear costs about $2.50 to ship. Mother Bear Project asks that each knitter provide $2.00 to support the costs of shipping. This still leaves a hole,” said Anne. “I thought that I might be able to help with shipping by making bears for a bigger audience.”

Anne began to experiment with the Mother Bear Project’s basic bear pattern to create something different. “I was finding all kinds of ways to manipulate the pattern to make things interesting and to use up all my extra short pieces of yarn,” Anne explained. Her first experiment resulted in a bear of another Irishman.

“I had met a great writer from Northern Ireland and something about the bears reminded me of him, so I made one that looked like him. The success of the Irish Author Bear made me think of others I might be able to make. Bono was an obvious choice as he is so easy to characterize,” Anne said.

Anne showed her first-made Bono Bear to several friends who also are U2 fans. The friends liked the bear so much that they asked her to make one for them. Their enthusiastic response to the bear made Anne realize that Bono Bear had the potential to raise the money needed to ship the other bears to South Africa.

Bono Bear is available to anyone who would like one at the cost of $20 plus shipping. All profits from Bono Bear will go to support the Mother Bear Project. Anne is dedicated to fulfilling requests as soon as possible but warns that because Bono Bear is all hand-knit, it may take some time for her to fulfill orders.

If Bono Bear is a success, Anne might create another U2 bear. “Edge may be next,” she revealed. “I’m thinking about how I can incorporate the beanie and beard.”

If you would like to purchase a Bono Bear and help the Mother Bear Project, contact Anne at docaye@yahoo.com. Anne has posted additional photos of Bono Bear here.