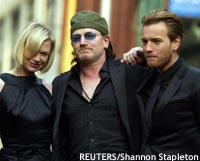 Bono was in the Big Apple yesterday to help launch the second Tribeca Film Festival, which was organized by pal Robert DeNiro. Bono is pictured here with Ewan McGregor and Renee Zellweger, the stars of the new film “Down With Love,” which premiered at the festival.