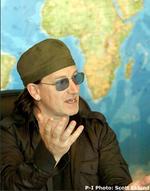 “I have such faith in Seattle,” said Bono yesterday. In the city to discuss the AIDS emergency in Africa with staff from Seattle newspapers and the Bill & Melinda Gates Foundation, Bono described Seattle as a city with energy that could be harnessed to help Africa.

While the Seattle Post-Intelligencer offered up a serious piece on Bono’s visit, the Seattle Times opted to share a beer with the U2 singer and focus on important topics such as Bono’s favorite superhero, Frank Sinatra tune, and junk food.