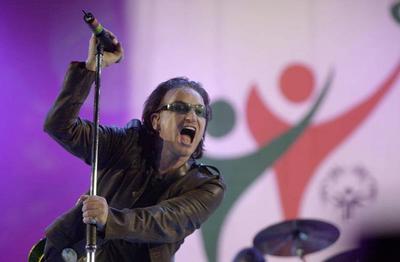 7.05pm – 10, 9, 8, 7…After much rehearsal and Mexican wave practise, the 2003 Special Olympic Games went live on air from Dublin. Irish comedian and TV host Patrick Kielty welcomed a capacity crowd that included more than 7,000 special needs athletes from all corners of the globe, their family, friends, coaches, crews, and minders.

For the first time since its 1968 inception, the Special Olympics is being held outside of America — not that you’d have noticed too much, with the newly revamped Croke Park now rivaling the best of its stateside counterparts for capacity and facilities. 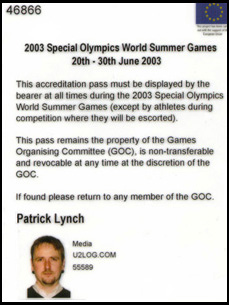 I count four tiers of seating before me, having traveled up seven storeys in a lift to take U2log.com’s place among the world press and local media. From the tops of the city’s rooftops to the vast stadium-width stage, or from the 20 blocks of seating lining the white tiled pitch, to the multicoloured-flag waving hordes, there was no camera lens big enough to take in the spectacle, no speaker loud enough to take in the din of the cheers. Tonight Ireland was playing host to one of its biggest events ever.

From Afghanistan to Zimbabwe and Belgium to Yemen, delegations of athletes were welcomed into the stadium from all its corners. Over the next seven days, they will participate in a full range of games including sporting categories from aquatics to gymnastics and volleyball.

Spotted among the delegations were Arnold Schwarzenegger, Jon Bon Jovi, Colin Farrell, and the legendary Muhammad Ali, in addition to many other luminaries from the worlds of politics, film, sport, and royalty. But even the Lords and Ladies, the Princes and Princesses didn’t quite manage to outshine the beaming smiles and unconditional good nature of the participants among whom they were privileged to walk.

It took over an hour and half to get all the teams seated, with particular enthusiastic cheers going to countries like Iraq and Libya — reminders indeed that sport (like music) really can transcend all political boundaries and that this was about people power at its very peak.

At 8.45pm, Irish President Mary McAleese arrived onstage to reiterate the heart-warming message that is at the very core of these very special games. The motto being that ‘Win or not, be brave in the attempt’.

A few moments later, The Corrs provided the first contemporary music performance of the evening. Starting with a full on clap-along version of ‘Breathless’, they finished with a traditional Irish piece that reminded everyone it is possible to raise the spirit of St Patrick for more than just one day per year. 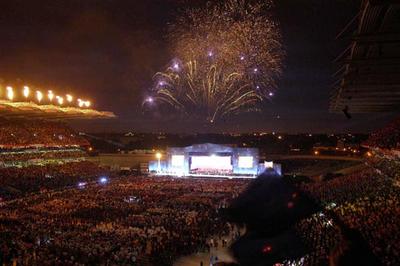 At 9.00pm, the Special Olympics flag was paraded around the stadium to a dramatic loud drum roll. A train passing on the tracks outside hooted as it passed, as roughly the same moment that a Dublin pigeon swept and soared in around the spectacle. The flag was eventually hoisted and — if the crowd reaction to it was anything to go by — the moment of glory was felt by all. 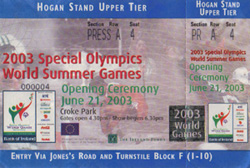 Today being the longest day of the year, Open House gave ‘Solstice’ the full Irish medieval treatment. Taking the summer solstice themes as its core, a number of black-gowned, Celtic-shield-yielding clanlike druids transformed to a series of colourful rays, eventually hoisting a giant fiery yellow and red tipped sun. After some more stage addresses, video footage of the extraordinary international journey of the Olympic flame was aired.

By 9.30pm, a 150-plus choir were leading the chorus in the athletes’ song ‘May We Never Have To Say Goodbye’. Ten minutes later Colin Farrell was presenting Macnas, Ireland’s favourite performing arts group (and no stranger to witnesses of U2’s Zooropa tour). Tonight taking their cue directly from the title of ‘The Ball’, they presented a colourful interpretation of a world ball, with one man running around the stadium’s perimeter inside of one. How he got in there and still managed to breathe was any one of more than 60,000 guesses.

At 9.50pm, Ronan Keating was followed by Samantha Mumba in numbers that stylishly filled the evening’s pop quota. Seven minutes later, Pierce Brosnan (Ireland’s very own James Bond) was on stage to present an expanded ensemble of Riverdance, who in turn performed the 1995 classic that elevated Irish traditional dance hundreds of years from its past to a new nineties turn of the century worldwide platform. Enjoying its biggest ever ensemble, the performance reached — if not surpassed — its original ground-breaking birth and received the biggest response of the night so far.

Just past the hour of 10, Bertie Ahern, the Irish prime minister, acknowledged all relevant parties for their input and support to the success of the event. In her Founder Member’s address, Eunice Kennedy Shriver reminded us that the special participants in these games were ‘the world’s most innocent victims who can suffer only because they are different’. She also noted another important date in the relevance of the games moving from America this year to Ireland, namely the visit of her late brother President John Kennedy to this isle some 40 years ago this week. Her speech went on to urge that if we ‘seek pain and understanding…and courage then come see the Special Olympics.’ 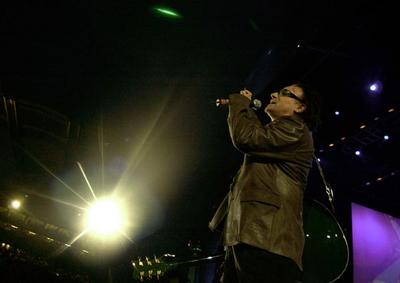 At 10.20pm, Katie Meade, a small girl with a huge charisma, had the honour of presenting U2. There followed a massive, unified response — one that even had the toughest of fellow press corps to their feet and shouting their approval — and then a moment’s silence as we waited to see just what U2 had picked from their repertoire to best rise to the occasion.

A fully orchestral-backed ‘One’ eloquently fitted the bill, its message of hope and unity totally in synch with the ceremonies ‘Share the Feeling’ banners. But if that performance was touching and poignant, then only ‘Pride’ could best rouse an irrepressible audience. On the monitors of the various TV crews around me, I could see the performance captured better than on the giant screens to either side of the stage, which tended to stick on delayed close-ups of the band. 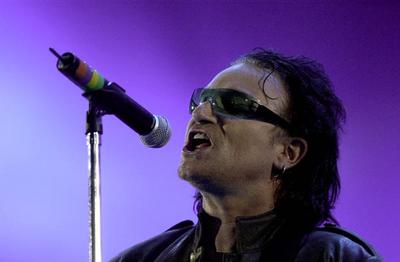 When Bono swaggered around the stage (in his jacket and tight black pants, his green guitar slung low on the hip), looking more like the rocker we haven’t seen in a long-time, the shots of him pitched against the audience took on Live Aid proportions. When he disappeared off stage, it seemed a pure U2 moment of Bono mischief, but he returned, escorting Nelson Mandela. Calling him ‘a president of the world and everyone interested in freedom’ Bono reminded us that the Special Olympics were about ‘the freedom to compete’.

All in all, it’s another special U2 moment, although given that the event is bigger than all assembled, they do for tonight feel like guests in their home city and indeed in the Croke Park venue that they last played on their 1987 Joshua tree tour, just a week short of sixteen years to the day. 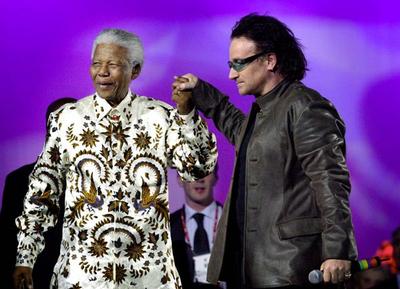 There can be no band bigger nor music better, and so what remained of the evening was the hugely symbolic and hair-raising key moments of the arrival and lighting of the Olympic torch, which ended in a series of fire jets around the stadium roof to which I’m close enough to almost get singed!

For those who came to see U2, we got to see and feel a whole lot more. This evening seemed to encompass not only the goodwill and determination of a lot of wonderful people, but it also seemed to ring through on every dream U2 have shared with us. Inspired by the event, they in turn inspired a wonderful occasion.

After wars and terrorism, through famines and epidemics, for a solid three hours black man sat with white, Muslim sat with Christian, and Iraq, Afghanistan and Libya sat with America. For all lucky enough to witness the magic that was the Opening Ceremony of the 2003 Special Olympics the flame of hope in humanity, and faith in its spirit was lit again.

60 thoughts on “No Band Bigger Nor Music Better”