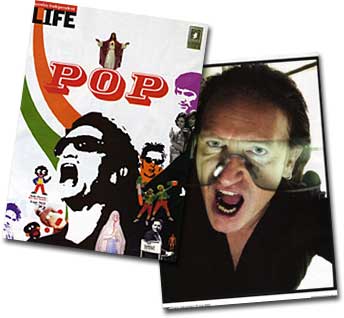 Bono is interviewed by Aengus Fanning in today’s Sunday Independent (Ireland). The two-part interview took place the day Bono spoke to the World Newspaper Congress. Part two will be published next week.

“I saw a picture of myself”, he says. “I guess I would have been 21, just about to make one of our first videos, and there was a look in the eye that was really striking: I think it was naivety. And somebody, a journalist, standing by, asked me, ‘What would you say to that person…’ – like your son – ‘… who is starting out on his journey?’ And I said, ‘You’re right.’ And there was no arrogance in that remark because I was right in a way then more than I am now. Because you learn fear. You learn to watch your step. You sacrifice your innocence for experience. You think that that is what will make you a better writer. You think that, but you are wrong. Clarity is what makes you a better writer: clear thinking. You have all that, in your first face.”

(Thanks to Emmett, who also informed us Welsh troubadour David Gray covered both One and I Will Follow at a concert in Killarney, Co. Kerry, last weekend. Thanks to Jonathan for the scans.)