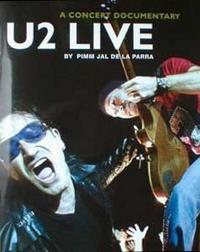 You can now pre-order the 2003 update of “U2 live – A concert documentary”, including the full PopMart and Elevation tours from:

(more about the book)

END_OF_DOCUMENT_TOKEN_TO_BE_REPLACED

The SOS Mandela concert has been rescheduled for November 30. The concert was originally planned for February 2 on Robben Island in South Africa, but was cancelled due to a disagreement between the funders and organizers. According to MTV, Bono and Queen are the only artists confirmed for the event so far.

U2 have passed on an invitation to perform at a concert that will mark the opening of the National Football League season, reports the Washington Post. The band cited recording commitments as the reason for their decline. Football fans at the September 4th show in Washington, D.C. will have to settle for Britney Spears instead.

Long-time U2 fan Ruby shares an amusing discussion she had with Steve Averill at the Rock Hall last weekend:

“I’d heard/read somewhere that Four5One had heard a half dozen tracks of the new [U2] stuff, so I was curious what they thought of the material. I asked Averill at the book signing if it was true that the new stuff was along the sonic lines of All That You Can’t Leave Behind. He initially said, ‘Yes,’ but then followed with, ‘Actually, it sounded more like War but with a harder edge…and with the depth of Achtung Baby.‘ Laughing, I asked him, ‘So you are sure they won’t turn around and give us, say, Pop part two — more techno?’ And he said, very definitely, that this was indeed a guitar-driven album.”

Images of the poster referenced in this recent post. 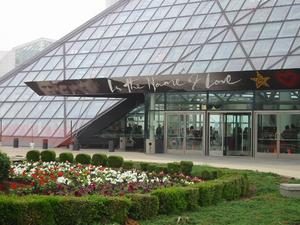 U2log.com asked U2 fan Maggie Huber to capture the U2 fan celebration in Cleveland last weekend in photos. Here’s what she saw…

END_OF_DOCUMENT_TOKEN_TO_BE_REPLACED 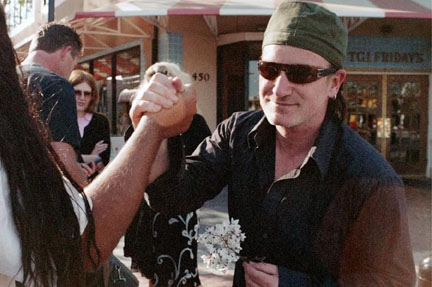 One of our readers, Susan Michael, ran into Bono down the street from her house in Oakland on June 6 and managed to snap a candid of him there.

She tells us:
“Bono hung out at Jack’s Bistro in Jack London Square from lunch and into the afternoon. Reports from my bartender friends are that he was sipping Jameson’s. He was charming and gracious to those of us that approached him after he came out of the restaurant. I apologized for interupting his conversation with his companions, gave him a flower, and he gave me a big hug! This brief encounter just reinforced my opinion of him as a great talent, humanitarian, and a cool person!”

Have you pre-ordered the Peter and the Wolf boxed set? No? Well, think again. U2log.com reveals a little more of its contents:

We hope to be able to show you some images from the book and cd soon.

U2log.com is now accepting wagers on which song U2 will perform at the Opening Ceremony at the Special Olympics this Saturday in Dublin.