Carlton Books are to release U2: the Best of Propaganda: 20 Years of the U2 Magazine.

U2’s official fan magazine, Propaganda, was launched in 1986. 31 issues were published, but things have been quiet around the magazine since the last issue. Rumours concerning its demise surfaced during the Elevation tour. The website states: “We are awaiting a final decision from the band as to how Propaganda will officially go away.”

From Amazon.co.uk’s synopsis: “This lavish, beautiful coffee-table book compiles the finest moments, wittiest essays, most candid interviews and beautiful photography from the magazine’s twenty year existence and reproduces them in their original design and typography.” 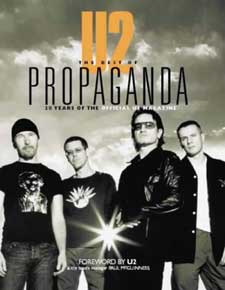 The book is due for publication in September 2003.

8 thoughts on “Best of Propaganda book”