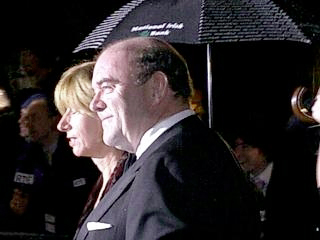 Paul McGuiness, his wife Kathy Gilfillan, Bono, and Ali Hewson were among the celebrities who attended Eircom’s 2003 Irish Film and Television Awards, which took place in Dublin’s Burlington Hotel on Saturday 1st November.

In the pouring rain, the stars arrived on the red carpet in front of the Burlington Hotel. Paul McGuiness and his wife braved the elements and paparazzi by entering via the red carpet, whereas Bono and Ali opted to enter via a private entrance and avoid photographers and the poor weather. 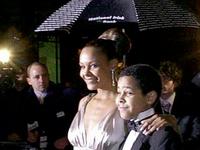 Samantha Mumba, Stuart Townsend, and Stephen Rea were just a few of the Irish stars who turned out on the red carpet, while international visitors included Ray Winston, Ralph Fiennes, Samantha Morton and Anna Friel.

Inside at the awards ceremony, Bono and Ali sat and dined at director Neil Jordan’s table. Jordan was honored with the Lifetime Achievement Award for his directorial services to the Irish and world cinema through such films as ‘Interview With the Vampire’, ‘Michael Collins’ and ‘The Butcher Boy’. 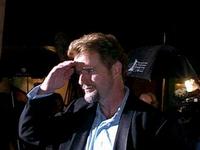 Contrary to advance publicity for the event, the award to Neil Jordan was presented by actors Aidan Quinn, Stephen Rea and Ralph Fiennes. Bono had no hands-on involvement in the show.

All aspects of the thriving Irish film industry were acknowledged and rewarded throughout the show. The ceremony was recorded and is due to be screened on Irish RTE TV on Sunday 2nd November.