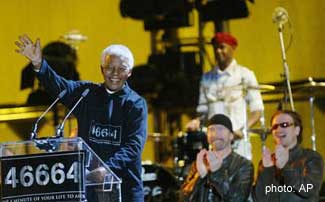 Bono introduced the initiater of the 46664 campaign, Nelson Mandela. The former president told the audience that people with AIDS “are serving a prison term for life.”

Mr Mandela, who watched the full five hours of the show with his wife, saw international stars team up with local heroes. The Corrs harmonised with Ladysmith Black Mambazo, Peter Gabriel — who had earlier duetted with Yusef Islam (Cat Stevens), sang alongside Johnny Clegg and Youssou N’dour joined Annie Lennox on stage for an empassioned performance of ‘Seven Seconds’.

Lennox had teamed up with Stewart for a Eurythmics reunion and surprised the audience with their classics ‘Here comes the rain again’ and ‘Sweet Dreams’.

The Edge and Bono returned to the stage near the end of the show to play ‘One’. Bono placed a candle on top of a monitor and lit it, dedicating the song to a friend in Capetown who had died the previous day. As the song finished with ‘Unchained Melody’ they were joined by Anastacia, Beyonce and many others to sing Dave Stewart’s song ‘Amandla’.

Queen’s Brian May and Roger Taylor closed the show with a greatest hits medley and an all star finale of ‘We are the champions’.

The concert will be screened globally by MTV on World AIDS Day on December 1. www.46664.com will have an archive of the streamed performances on Monday.