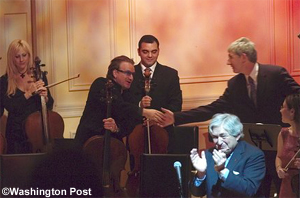 Bono provided a dramatic reading of W.B. Yeats’ “September 1913,” with musical accompaniment, at an event titled the Peace Concert at the Library of Congress in Washington last night. The concert was in honor of World Bank President James Wolfensohn, who celebrated his 70th birthday earlier in the week. Among the attendees were Bill Clinton, who hung out with his Irish friend for the majority of the evening.