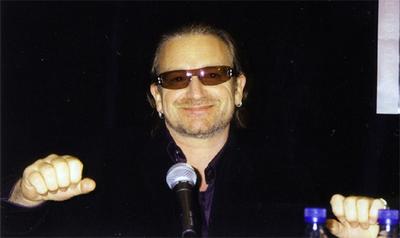 Not one to waste an opportunity, Bono turned a press conference intended to focus on his being honored by the King Center into a discussion about the global AIDS crisis with local and national media in Atlanta, Georgia, on Saturday afternoon (Jan. 17). In true Bono style, he informed and entertained as he spoke about the issue closest to his heart.

U2log.com presents a transcript of Bono’s comments and the media Q & A that followed.

Moderator:…and now we have the pleasure of hearing from our other honoree, Bono.

Bono: [grinning] Umm, I really don’t know what to say. Umm, it’s just great to be standing next to this extraordinary woman to my left [gestures toward Mrs. Coretta Scott King]. In a way, I’ve been as big a fan of Coretta Scott King as I was of her husband. I read her writings, and it formed the way I saw the world and gave me a reason to want to change it.

And I’m thrilled also with Target [gestures toward Laysha Ward from Target]. They’re an amazing corporation. They’re an example to be followed. 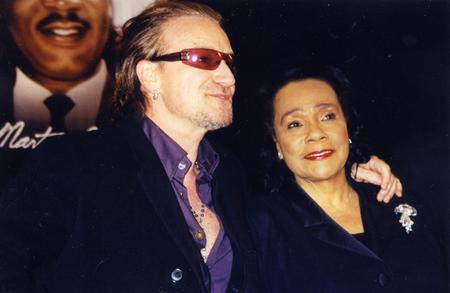 We had meetings today with activists from all across Georgia–people working on the plague of AIDS not just in America, but the global AIDS crisis. I was trying to say to them that some things are so important that we cannot afford to posture. We cannot afford just to take an easy position. So we need corporate America, we need church America, we need student America, we need all the different Americas that are here if we’re gonna actually get a significant change on the way we see our responsibility to the poorest of the poor.

It’s fitting also, I think, to be in Atlanta because it’s where the world’s richest countries and their leaders are coming, to Georgia, this summer for their big hoo-ha. [media laughter]

And I tell ya, they’ve come to the right state. Because I met some pretty noisy, energetic people today and they’ve got something they want to say. And they’re going to. They can be on an island if they want, but these folks can swim! 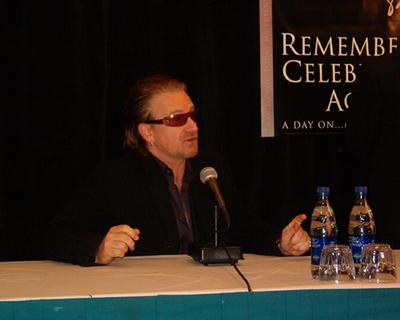 And, I think, the tradition that the King Center embodies has passed down a vital, energetic message to the younger and younger generation that wants to, you know, remember and to celebrate and act.

Dr. King had a dream–and I’m not just talking about the American dream–it was a much bigger idea, actually. An idea that could fit an African dream, an Irish dream… You know, it was a call to action. That’s why I’m excited about being in Atlanta. We’ve got something going here.

Getting this award is a huge honor. The greatest thrill is to see that the King Center is still as involved with the community as ever. 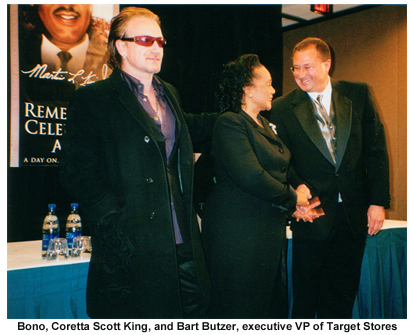 Q: [paraphrased] Do you hope that other young artists will become more involved in the kind of humanitarian work you’ve been doing?

Bono: Did you say “other young artists”? [media laughter]

You know, Atlanta is not just the capital of civil rights in America. It’s also the music capital. A lot of extraordinary artists out there: Outkast, Jermaine Dupree…There’s too many to go on and on about. I’m getting calls from them, people calling up: Jay Z, P. Diddy, Beyonc

64 thoughts on “Bono’s Journey of Equality”