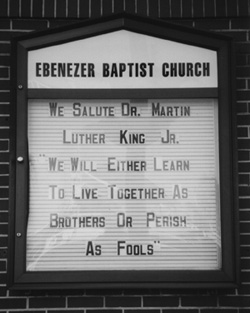 Dr. Martin Luther King, Jr., was one of the most important personalities of the twentieth century because his dream of equality made the entire world think. His ideas were and remain universal, transcending all barriers. One need not be a certain race, religion, or nationality to understand, appreciate, and value Dr. King’s ideas.

Because of the universal appeal and application of Dr. King’s ideas, it has been said that he belongs to all people, not just African Americans. On Saturday, January 17, 2004, that statement was proven true as people of many races, religions, and nationalities gathered to celebrate the legacy of Dr. King at the King Center’s annual Salute to Greatness awards dinner in Atlanta, Georgia.

Central to the evening’s program was the award of one of the center’s highest honors, the Salute to Greatness Award, to two recipients: Bono and the Target Corporation. The award is given to individuals and organizations in recognition of outstanding efforts toward building Dr. King’s “Beloved Community.”

Bono was recognized for his humanitarian work on the issues of debt relief and AIDS in Africa, and for his activism, promoting and working with organizations such as Greenpeace and Amnesty International. The Target Corporation was recognized for contributing more than 2 million dollars each week to educational, art, and social programs that benefit the communities it serves. 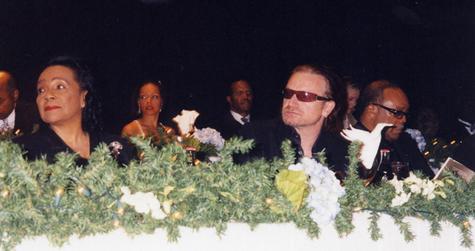 Following Mrs. Coretta Scott King (Dr. King’s widow and the founder of the King Center), Bono took his place at a dressed table at the front of the Hyatt-Regency Ballroom with the King family, dinner hosts, and special guests, among them Bono’s friends, producer Quincy Jones and actor Chris Tucker.

The program began with emcee Yolanda King (Dr. and Mrs. King’s eldest daughter) welcoming the honorees and guests. She proclaimed that the dinner was the most successful one for the center in twenty-one years and stated the theme for the dinner program. She promised that before the evening was over, each person’s heart, mind, and stomach would be full.

Guests were then treated to the words of Dr. King’s only surviving sibling, his sister Christine King Farris, who was introduced by dinner chairman Jesse Hill, Jr. Mrs. Farris described how her brother’s work was “a model for peace and change” in the world and said that ML–the name she called him through his life–will be remembered as the conscience of a generation.

Following comments of praise for the King Center and the King family by Atlanta Mayor Shirley Franklin, Yolanda King again took to center stage to describe the work that the King Center performs and to recognize her mother’s commitment to the center. Calling the center her mother’s “fifth child,” Ms. King hailed her mother’s work as having improved the lives of people all around the world.

As she walked to the podium to kiss her daughter, Mrs. King received a standing ovation. Referencing her daughter’s comment on the number of children in the family, Mrs. King revealed that she had adopted a child that day–an orphan from Ireland.

“Bono is another son to me now,” said Mrs. King, smiling at him. “We officialized that today.”

Before dinner was served, the Honorable Barbara Masekala, the Ambassador of the Republic of South Africa to the United States, addressed the audience and encouraged everyone to try to emulate Dr. King’s life.

After dinner, guests were invited to sing Stevie Wonder’s version of “Happy Birthday” to commemorate Dr. King’s birthday while Mrs. King lit candles on a cake for her husband, a traditional since his death. Dr. King would have celebrated 75 years in 2004.

“There is nothing in all the world greater than freedom.
It is worth paying for;
it is worth losing a job;
it is worth going to jail for.
I would rather be a free pauper than a rich slave.
I would rather die in abject poverty with my convictions
than live in inordinate riches with the lack of self-respect.”

–Martin Luther King, Jr.
from his address before the First Annual Institute on Nonviolence and Social Change (Montgomery, Alabama, Dec. 1956)

Mrs. King first bestowed the Salute to Greatness award to the Target Corporation. Accepting for the company was Bart Butzer, the executive vice president of Target Stores, whose acceptance speech focused on the success of the programs that Target Corporation supports involving children.

Between presentations, singer Dionne Farris, who is most well-known for her work with Atlanta-based, hip-hop band Arrested Development, provided the entertainment, performing a soul tune that brought Bono and others off their chairs applauding enthusiastically.

A five-minute video highlighting Bono’s career and activism was shown before his award presentation. As he watched his life on screen, the singer smiled with humility.

In her award presentation speech, Mrs. King praised Bono as a person who has inspired many artists and people to get involved in issues that benefit humankind and remarked that Bono’s work is in the spirit of Martin Luther King, Jr.

“Bono, my son,” said Mrs King, inviting him to join her at the podium to accept the award.

“Mama!” Bono called out and rushed to her side, elicting a response of laughter from the audience.

Mrs. King presented Bono with the Salute to Greatness award with her daughter and Jesse Hill, Jr., looking on and applauding. 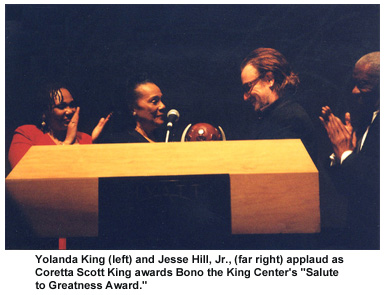 After acknowledging and thanking the King family, Bono recognized his friend Quincy Jones.

“Quincy Jones is over there,” Bono said to huge applause. “Well, I can tell you that I would not be standing here without Quincy Jones. We’ve been to a few extraordinary places together, and I’ve learned so much at his feet. And he has an extraordinary thing. He has the quality that I admire most in people: he has grace. He is a very graceful man, and I’m just thrilled that he’s here.” 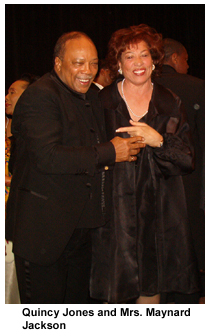 Bono also acknowledged many of Georgia’s musical talents, including producer Dallas Austin, who was in attendance; Jermaine Dupri, whom he noted had “poured his perfection into an Artists Against AIDS project” they are producing; REM, whom he called “the best band in America”; and Elton John, who is actively involved in several AIDS charities and has been a supporter of Bono’s work (Elton John owns a home in Atlanta). But the audience got most excited when Bono spoke of another band from Georgia.

“Atlanta has Outkast. Now to me, they’re like The Beatles of America!” said Bono, smiling at the huge response that the band’s name elicited from the audience. “Hip-hop is such a powerful force. Who communicates better? I mean, they’re stories some folk don’t want to hear, but they’re true stories. It’s a child of blues, and there’s always something compelling about the truth…the raw, unexplicated truth. And I want to salute hip-hop and the people who represent it here tonight.”

Bono’s tone became serious when his speech turned to the topic of Dr. King and how the reverend inspired him.

The audience roared in response to Bono’s moving words. 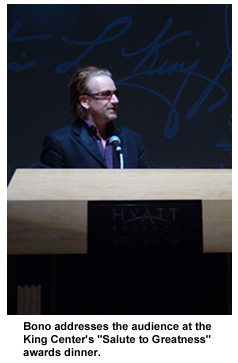 Bono then likened his campaign to help the people of Africa to Dr. King’s campaign for civil rights in America: “Every age has its massive moral blindspots. We might not see them, but our children will. Slavery was one, segregation was another. Where is the fault line today? It’s Africa.”

“I was in South Africa two weeks ago just to look up at that big sky, to look across this beautiful spirit and these smart people, fighting for their lives and for their dignity. And I realized that we are the first generation that has the resources to refuse the inevitability. We have the science, we have the pharmaceuticals, we might even have the attention of the press and the G8 when they come to Georgia this summer. Let’s let them hear from us. Let’s let them hear,” Bono implored the audience.

For the conclusion of his speech, Bono turned the ballroom into a Baptist church, eliciting shouts of praise and exclamation for his words from the audience.

“Dr. King used to like to tell the story of the prophet Jeremiah,” Bono began. “Jeremiah, he said, looked out and saw evil people often profiting, and the good and righteous people often suffering. Jeremiah wondered at the injustices in life and asked, ‘Is there no balm in Gilead? Is there no physician there?’ And Dr. King went on ‘Our slave forefathers came along. They too knew about the injustices in life. But they did an amazing thing. They took Jeremiah’s question mark and straightened it into an exclamation point and in one of their spirituals they could sing, There IS a balm in Gilead that makes the wounded whole. There IS a balm in Gilead to heal the sin-sick soul.'”

“Sometimes he says it, sometimes he sings it. It’s an important tune,” Bono continued. “Today, four decades on, at an AIDS clinic in Zambia or Uganda or Ethiopia, there is a dying woman who is asking her God the same question. ‘Is there a balm in Gilead?’ she asks. Well, God hears her, but do we? Because we too know the answer. The answer is NO. There is no balm in Gilead. There is no balm in Gilead. The balm is here. We’ve got to get it to Gilead. We’ve got the medicine and the money and the same love for justice that guided Dr. King. If we apply these things–all of them–and we begin to be worthy of his example, and take another step in our long journey of equality, we’re going to get there.” 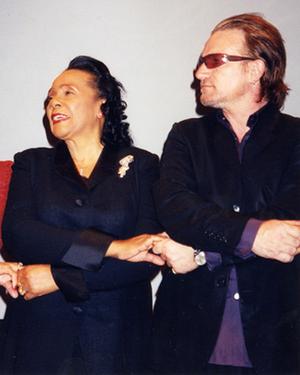 The awards program ended with everyone joining hands to sing “We Shall Overcome,” a gospel song associated with Dr. King.

44 thoughts on “Love Does a Better Job”