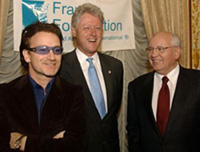 AFP reports that Bono has interviewed 1990 Nobel Peace Prize recipient and former Russian President Mikhail Gorbachev for a documentary about Nobel peace laureates. The film, funded by the Nobel Foundation, will employ celebrities (Paul Simon, Michael Douglas) in the job of interviewing other laureates. We think it’s likely that Bono’s interview with Gorbachev is the one filmed at the World Political Forum in Italy last May. (AP file photo)