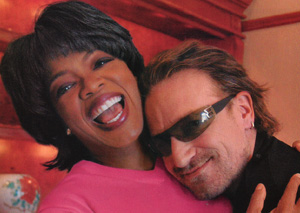 Oprah: So when do you really have a good time?
Bono: When I’m playing with the band.

Bono is interviewed by Oprah Winfrey in the April issue of O magazine. In the interview, which was conducted in South Africa after the 46664 concert, Bono discusses music making (It’s much easier to be successful than it is to be relevant…I don’t know how U2 will stay relevant), performing with U2 (As a soloist, I’m average at best. But with the band? There’s nothing better…), life with Ali (why I have the life I have…is because of my wife Ali. She is just really so cool), and the source of his creative talents (The truth is at the root of every piece of creativity).