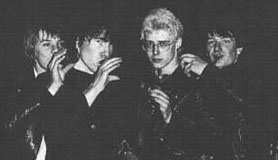 Fans will have the opportunity to understand what Bono means when he says U2 come from punk rock with the future release of Punk: An Attitude. The DVD and TV documentary traces the history of the punk movement and chronicles the music of such artists as The Velvet Underground, Iggy and the Stooges, The Ramones, The Sex Pistols, The Clash, and U2. (Yes, they are punk rock!)

Don Letts, former DJ at The Roxy (the punk club in London in the day) and member of Big Audio Dynamite (who opened for U2 during the Joshua Tree tour), will direct the documentary, featuring rare and famous archive footage of punk’s greats. Because the documentary is currently in production, a release date has not yet been scheduled.