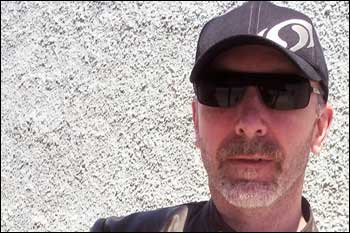 Here’s the Edge pictured by Aaron Govern outside Hanover studios on Wednesday. Aaron writes: “Speaking to Edge he confirmed that the band would complete the album ‘by the end of June – first week of July at latest’. [ … ] When I asked Edge if this would be the last album they would record there, he said that it may not be because ‘it wasn’t expected to be knocked down for another two or three years yet.'”

Steve Lillywhite, in a chirpy mood, told Aaron he was ‘really enjoying the recording’ and that he had been with the band since March. This week the band have been doing ‘lyric recordings’. Lillywhite was especially pleased ‘because we finished the single yesterday.’ (June 15th). 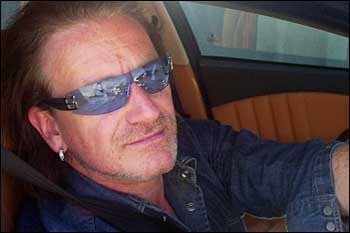 Aaron further reports Bono drove up to the studio in a Maserati. A car to suit Bono’s new career as a venture capitalist? He stopped to sign autographs, but did not speak to the fans as he was on the phone.

Through the open studio windows fans could hear playback for a full two minutes of “a song which had no vocals but was very upbeat and rocking in a similar vein to Beautiful Day/ Electrical Storm.”