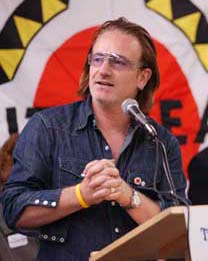 We were intrigued to see in photos from the Boston One Campain launch (video too!) Bono sporting what looks to be one of Lance Armstrong’s “WearYELLOW LiveSTRONG” bracelets. The bracelet is being sold through the Lance Armstrong Foundation to benefit people living with cancer.

The bracelet went high profile recently when Armstrong wore it during his win of the 2004 Tour de France.
(Photo: theonecampaign.org)

DJs will be chillin’ as U2 are thrillin’. WBWC 88.3 FM has announced that for the fourth consecutive year it will host a U2 marathon this September. Click the link below to read the radio station’s press release on the event.

END_OF_DOCUMENT_TOKEN_TO_BE_REPLACED

If you want to hear 5 seconds of Bono singing at the Democratic Convention in Boston on Tuesday, go to whdhTV. Click video and select Tuesday’s 11.00 pm newscast. It’s about 5 minutes in.

Whacked out U2 rumour season has definitely started in U2 fan land — and we like it. Tasty things we’re hearing from ‘anonymous industry sources’ (we’ll call ’em A.I.S. in future) and ‘absolutely nobodies’ this week are: 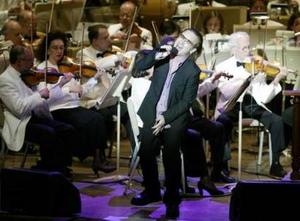 Last night Bono performed “Pride (In the Name of Love)” with the Boston Symphony Orchestra at an event honoring Senator Ted Kennedy at Boston’s Symphony Hall. Reworking the lyrics to acknowledge Kennedy’s brothers, John and Bobby, Bono dedicated the song to the Massachusetts senator and his sisters, Eunice and Jean. Bono also performed “The Hands That Built America” with Yo-Yo Ma.

While on stage, Bono delighted the audience by announcing that U2 will kick off the band’s next U.S. tour in Boston in March 2005 — news to which we respond with a “Huh?!” (Reuters photo)

Bono will have a busy day in Boston today. This morning he will help to launch the ONE CAMPAIGN in the city and later appear at a tribute honoring Senator Ted Kennedy at Symphony Hall.

“At the conventions there’s history in the making for both parties. That’s what people from around the world will be tuning in to hear on their transistors. That’s why I’m going to be there. I want to be a nagging presence in sunglasses, a visual reminder of people who have a life-or-death stake in what is and isn’t discussed on the convention floor.”
–Bono, explaining why he will attend and speak about AIDS at both the Democratic and Republican National Conventions

The Edge and Bono have talked to Neil McCormick about the theft of the cd containing songs off their new album.

Bono: “If it is on the internet this week, we will release it immediately as a legal download on iTunes, and get hard copies into the shops by the end of the month,” he told me. “It would be a real pity. It would screw up years of work and months of planning, not to mention fucking up our holidays. But once it’s out, it’s out.”

McCormick also reveals more details on the circumstances in which the CD was stolen:

“Apparently, the band were all posing in an empty swimming pool, 50 metres from the studio, when someone snatched the CD. French police were immediately called in to question a handful of suspects, including photographers, make-up artists, set builders and stylists.”

We’ve received some more details from U2tour.de on the four different formats U2’s new album will be released in:

Billboard reports that Bono has written a new song with Cyril Neville. The track, titled “Kingdom Come,” will appear on the Neville Brothers’ forthcoming album Walkin’ in the Shadow of Life, which is scheduled for release on October 19.

This is not the first time Bono has worked with the Nevilles. In 1989, Bono and Cyril Neville co-wrote the song “Jah Love.”