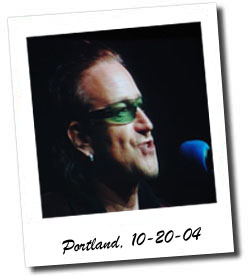 Bono speaks in Portland, Oregon, about Africa: a continent of tragedy and opportunity.

Beginning his speech with a surprise announcement, Bono revealed that two women had returned the lyrics and notes that had been stolen from him 23 years earlier, just after U2’s first gig in Portland. The notes and lyrics were for U2’s then upcoming album October.

“People who could have published or sold my back pages, for absolutely no award, have handed them back. An act of grace, an act of goodness; you will never know how much that means to me. You will never know the contents of these letters because of the decency of these two women. They’re here tonight, and I want to thank them.”

After his surprise announcement, Bono then launched into a short history of his own personal awakening to activism. With a nod to The Clash, whom he called “a public service announcement with guitars,” Bono admitted to being the kid in the crowd who took it all at face value and described how the seed of activism was planted. Years later, the month he and his wife spent in Ethiopia marked the beginning of his journey as a “rock star with a cause.” Since that time, the journey has led him to meet with presidents, prime ministers, and the Pope.

On October 20, Bono’s journey led him to Portland, where he kicked off the World Affairs Council of Oregon’s 2004-2005 International Speaker Series. 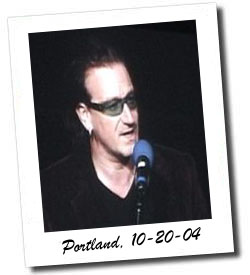 Before a nearly sold-out crowd of 4,300 people, Bono spoke about the AIDS crisis that has become pandemic in Africa. With more than 6,500 Africans dying each day, he made it clear that Americans can and must do their part by forgiving the overwhelming debts that African countries have accrued and by providing the drugs and education that can prevent AIDS.

Bono brought up a theme that those familiar with his work readily recognized: as a fan of America, he wants everyone else in the world to be a fan too. He was quick to point out that America could use all the fans it can get these days.

“The war against terrorism is bound up in the war against poverty,” Bono stated. “Isn’t it cheaper to make friends of potential enemies than to fight them later?”

Bono closed his 45-minute talk in elegant style, talking about how history will remember this generation: “This is our space race, our moon shot. This is our run for greatness. I believe that when the history books get written for our age, we will be remembered for three things: the rise of the internet, that one is obvious; the war against terror; and this AIDS in Africa business, a continent in flames and what we did or what we did not do to stop it.” 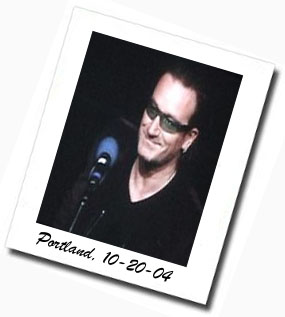 Next, Bono introduced Agnes Nyamayarwo, the African AIDS activist who accompanied Bono on the Heart of America Tour. In a moving speech, Agnes shared her personal history in the battle of AIDS and gave the statistics a very human face. She talked about losing her husband to AIDS, about discovering how she had passed on AIDS to her children unknowingly, and about the children she lost. She also talked of hope and how medicine and education were already saving so many lives, including her own.

The program ended with a question and answer session with Bono. The moderator of the program selected written questions collected in advance from the audience and the World Council of Oregon’s web site.

Bono used his humor and charm to respond to the many questions, which covered everything from “What was the Pope like?”–to which he responded that although the Pope, who tried on Bono’s sunglasses, had a sense of humor, the Vatican guards did not and made sure none of the photos of the Pope left with Bono–to “How does your faith influence your passion, your commitment to these concerns?” In response, Bono said, “I generally find it very hard to talk to people who can sum up their whole faith in three minutes–the kind of people who bleed all over you.” He also mentioned being inspired about how the Bible teaches us to care for the poor and not about how to judge one another. 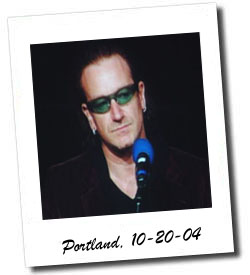 After hearing Bono’s speak so passionately, it is difficult to imagine that anyone could walk away wanting to do anything less.

U2log.com wishes to thank Laura Connelly for her contribution to this report.

All photos by Peter Hanning for U2log.com. Please do not use the photos that appear here on your website or forum without explicit permission.