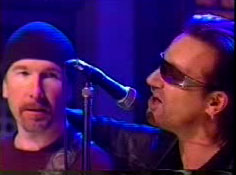 U2 played “Vertigo,” “Sometimes You Can’t Make It On Your Own,” and “I Will Follow” on tonight’s Saturday Night Live program in New York City. (Most bands perform only two songs on the program, with some occasionally slotted time for only one.)

Bono, Edge, and Adam all came out into the audience for the finale of “I Will Follow,” with Bono either making the day of, or completely terrifying, the woman whose lap he jumped into during the middle eight. (We could tell he made the day of SNL cast member Amy Poehler, who wept for joy when Bono embraced her at the song’s conclusion. Rachel Dratch, who was hopping up and down like a maniac, also seemed to be enjoying herself.) The credits rolled over the performance, as the show was scheduled to end at 1AM. As the broadcast ended, Bono could be heard saying, “One more?” as he returned to the stage.

A reader who attended the show tells us that the band gave an encore of three songs after the broadcast ended. They performed “All Because of You,” repeated “Vertigo” (without the countdown intro), and played a third song, which the reader cannot recall the title.

During the dress rehearsal for the show, Bono shared a story about his father before the band performed “Sometimes You Can’t Make It On Your Own.” He described how his father used to listen to opera and wave his mother’s knitting needles like a conductor. Bono credited his father with passing on the ability to hit that “amazing note” in the song to him after he died.