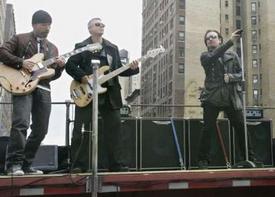 Eyewitness reports confirm the rumour we mentioned previously, saying the band are playing from the back of a flatbed truck and will be making random stops throughout the city all day until the concert at 3 pm. Let’s hope they’ve buckled up!

11:15 am EST: Robin contacted us to say U2 were playing in front of Columbia University.

1:50 pm: Liz reported U2 convoyed past her office at Times Square, where Bono sang “Santa Claus Is Coming to Town.”

2:10 pm: Brian reported seeing a helicopter following U2 near Madison Square Garden. A cameraman was dangling precariously out of the helicopter. Risking his life for U2, huh? He must be a fan.

3:10 pm: Fans at Ferry State Park have been allowed into the concert area. Our staff on the scene report the crowd have rushed the stage and that the entire area surrounding the park is littered with people, all the way up to the Brooklyn Bridge. U2 have not yet been spotted in the area.

3:45 pm: U2 are on Manhattan Bridge, in full view of the crowd at Ferry State Park who are cheering the band’s arrival.

More info as it comes in…