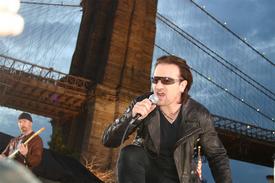 U2log.com staff members Ruth Barohn and Chris Conroy both attended the Empire Fulton Ferry State Park performance in Brooklyn on Monday, November 22nd. The following is their report on the show — text by Chris Conroy, photography by Ruth Barohn.

They were not even remotely kidding when they said U2’s appearance in New York City today would “stop the traffic.” Ask any of the poor schmoes who got trapped behind the band as they spent the afternoon rocking away on a flatbed truck, driving the length of Manhattan Island from Harlem to the banks of the East River. As U2 made their way across the Manhattan Bridge into the borough of Brooklyn, helicopters swarmed their position, and a crowd of some 3,000-plus New Yorkers gathered in Empire Fulton Ferry State Park went absolutely insane as they figured out who that strangely flamboyant little speck on the back of the eighteen-wheeler was. And you’d be surprised at just how recognizable the silhouette of the Edge and his guitar is, even from several thousand feet away.

A few minutes later (traffic on Flatbush Ave. permitting), the band bounded onto the stage in an insanely scenic concert location. Directly behind the stage, the immense brick pylons of the Brooklyn Bridge loomed, floodlit and glowing, while beyond the river shimmered the unparalleled skyline of Lower Manhattan. Cameras on cranes swooped over the outstretched hands of the audience as the band crashed into “Vertigo,” with Bono leading his acolytes in frantic call-and-response. Trust us, if you had any doubts about the chorus of U2’s first single being, well, a bit silly, you won’t feel the same way after you’ve found yourself — and several thousand of your closest friends — bellowing it back at the stage. “Brooklyn,” he informed us as the song pounded to a close, “you’ve just been jammed.” (The concert was being taped for a program titled “MTV Jam” — not to be confused with the hip-hop show of the remarkably similar title.) 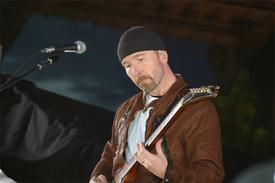 From “Vertigo,” the band kicked directly into a tight, energetic rendition of “All Because Of You” (the song they were said to be filming a video for as they cruised across New York). The Edge’s remarkable guitar work earned the greatest cheers during that song, and it was very well-received by the crowd, who were a surprising — and pleasing — mix of diehard U2 superfans and just-plain-folks who weren’t as familiar with the new material. (One European couple we met had had no idea that the band would be playing today; they’d just been out for a walk in the park. They immediately hopped in line behind us and waited like troopers for the three-plus hours before the show.) The crowd fell respectfully (almost eerily, for such a sizeable mass of people) silent as Bono related the story of Christopher Nolan and “Miracle Drug,” now well-known to the U2 faithful. 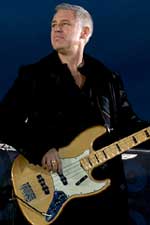 It was “Sometimes You Can’t Make It On Your Own,” however, that officially cemented this show as a U2 concert unlikely to be forgotten. After explaining how his father used to conduct the radio with knitting needles, Bono told us that when Bob Hewson died, he gave his son a gift: a singing voice of the kind of strength he hasn’t had in years. There’s an “incredible note” in this song, he told us, and then, addressing his father, he cracked, “Don’t fuck it up now.”

Did he hit the note? Well, not really, but who can blame him? Reaching a note as high as the one in the climax of “Sometimes” must be difficult for even the most trained singers. To do it, night after night, in a song of such wrenching emotional weight is almost inconceivable. But it’s true that Bono’s voice on this night had a force, a range, and a power that we haven’t heard in some years — possibly even since before the beginning of the All That You Can’t Leave Behind shows. Nearly every note was nailed, with strength to spare, including the powerful turn of “Sometimes You Can’t Make It On Your Own” — “Can you… hear… me… when I… siiiiiiiiiiinnnng,” he exclaimed. There was absolutely no question that we could. The onlookers thronging the decks of the Brooklyn Bridge, hundreds of feet above, could hear it too and, no doubt, Bob Hewson could as well. 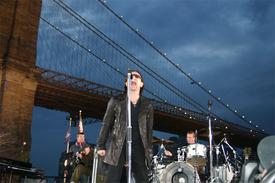 After “Sometimes,” Bono began to talk to us about every New Yorker’s favorite topic: New York City. “What a sight,” he said, gesturing to the absolutely gorgeous, blue-steel silhouette of the Manhattan Bridge to the northeast, and, as if on cue, a subway train rattled across it, a string of glowing lights in the setting sun. When they first arrived in New York as teenagers, Bono said there was “snow on the ground” (sound familiar?) and as they swept over the bridge for the first time, they were taken aback by the city’s beauty. “The chorus of this song,” he informed us, “is set in New York City.” And so began “City Of Blinding Lights,” the early contender for the next tour’s transformative “Where The Streets Have No Name” moment. The audience howled the song’s simple, potent chorus back to him, pumping their fists in the air — “Oh! You! Look! So! BEAUTIFUL tonight!”

“How do you know this shit?” he asked the audience after the song’s close. The crowd’s enthusiastic participation in the new songs had occasionally drowned out his own vocals, and their cheers as he announced “Original of the Species” had taken him by surprise. “Original of the Species” was the only song of the night that hadn’t yet been performed live by the full band. Bono informed us that they were most definitely “still working out how to play it.” The Edge forsook his guitar entirely, moving to the back of the stage to play keyboards (“Is there a light on The Edge?” Bono asked us, concerned for our sightlines. “I know there’s a light in The Edge, but on him?”), and Bono filled in on the six-string. “I don’t play guitar very often,” he said, “and you’re about to find out why.” 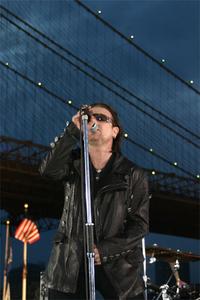 It took the band some time to tune up and get ready, which Bono filled with banter: “Adam Clayton, wearing a very fancy jacket…” (It’s true, he was: a fetching and somewhat reflective black waistcoat) and “Larry Mullen, the only man hard enough not to wear a jacket in Brooklyn in the middle of winter. Sure you haven’t got any thermals on under that?” he jabbed. Larry immediately stood up and, much to the delight of the audience, began to strip — though he stopped himself just before the shirt parted for good. The band then began a truly remarkable performance of the song, with only Bono and Edge (and the slightest backing beat from Larry) playing until shortly before the second chorus, when Adam and Larry enthusiastically joined in. The sound of it became a bit lopsided by the end, and Bono was grinning like a fool as it glided to a close. “Well, that was… funny,” he laughed. The levity continued through a twinkling, gentle version of “She’s A Mystery To Me,” originally penned for Roy Orbison, with Bono busting out a remarkable high note at the end of each chorus. “I don’t know how to finish it,” he admitted after the second chorus. Laughing, Larry mouthed, “Oh, I’ll do it — one, two, three, four” as he counted off the final beats of the song. 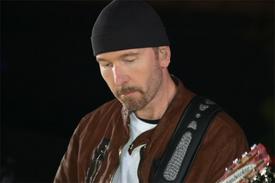 From then on, though, U2 were on much more confident territory, and the crowd exploded as the familiar strains of “Beautiful Day’s” lovely keyboard part echoed off the bridge behind them. The band tore through the tune with abandon, Bono effortlessly going for — and reaching — the high note he often avoids in it. “Re-ee-ee-EACH me,” he sang, with impressive clarity. And just when we thought they’d finished, The Edge ripped into the ecstatic opening riff of “I Will Follow,” kicking off another wave of frantic leaping and fist-pounding.

The band then thanked the crowd and turned to leave. The fans immediately began an intermingled chant of “One more song! One more song!” and the familiar refrain of “40” — “How long… to sing this song?” After a very short pause, Larry appeared again behind the drums, and Bono shoved The Edge back on stage. Adam and Larry snapped into the instantly recognizable rhythm of “Out Of Control,” with The Edge joining in shortly thereafter. When it finished, Bono told us, “One more song! One more time…for us now!” and resurrected the band’s age-old tradition of playing their first song twice, treating us to an encore of “Vertigo” that far surpassed the set-opener in ferocity, intensity, and, crucially, volume (it seems the initial performance may have been set at MTV’s broadcast volume, as it was slated to be used on the network’s TRL program — hence Bono’s “for us”). 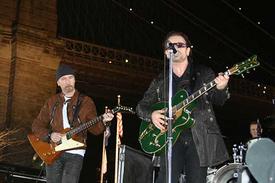 And with that song, they were done — but it was a magnificent finale. Bowing together, the band thanked the audience, MTV, the Brooklyn Police Department, and New York City, before finally taking their leave of the stage and bringing an end to what was, unquestionably, one of the most visually beautiful shows of their career — a cracking start to the American campaign and an unquestionable reminder that U2 are one of the best live bands on the planet, performing new and almost entirely untested material with invisible skill and grace. The guy with the big mouth and the way with a catchphrase was right — New York had, indeed, been jammed. And we liked it.

All photos ©Ruth Barohn/U2log.com. Please do not use the photos that appear here on your website or forum without explicit permission.