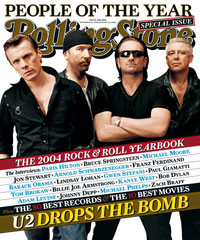 What’s the story behind the odd Spanish countdown at the beginning of “Vertigo”? Bono tells Rolling Stone: “There might have been some alcohol involved.”

Rolling Stone‘s Band of the Eighties is featured on the cover of its current issue (RS 964/965). Excerpts of the magazine’s interview with the band and a feature article are available at Rollingstone.com.

2 thoughts on “U2 feature in Rolling Stone”