150,000 Tickets to three U2 shows in the Amsterdam Arena on July 13, 15 and 16 sold out within 90 minutes today. Fans, many of whom queued overnight at GWK, Post Office and other outlets nationwide, were allowed 6 tickets per transaction. 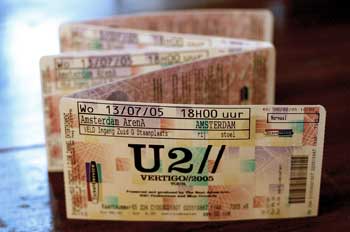 “Six of your hottest, please.”

While queues in Amsterdam city itself were relatively short, outlets elsewhere in the country, in particular outside the country’s ‘Randstad’ (the main urban area in the West) were swamped with fans. Reports of the various queue lengths as well as scuffles between fans at a Nijmegen outlet spread like wildfire.

Only one show had been announced in advance. The July 15 and 16 dates were added when the first date sold out. Standing room (GA) tickets for July 13 were gone within 3 minutes.

In Austria, the Vienna date sold out in 75 minutes.

26 thoughts on “U2 sell out Amsterdam concerts in 90 minutes”