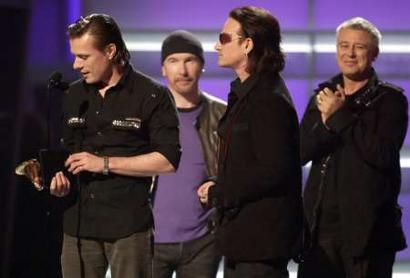 Few people will have missed taking note of the 47th Grammy Awards this year. As it turned out, they ended up being a real treat for U2 fans. The band bagged the awards for all of the three categories the hit single Vertigo was nominated in: Best rock performance by a duo or group with vocal, best rock song (songwriters award) and best short form music video

The band also performed “Sometimes You Can’t Make It On Your Own”, the new single which went straight to the number 1 position in the UK charts.

Edge dedicated the award to his daughter Sian, while Bono said he was genuinely surprised. Larry topped it all off, by mentioning the uncertainty they had all been in, as well as offering an apology to their fans regarding the recent ticket sales. An apology that hit home in many hearts.

We at U2log are duly impressed by this grand gesture, and despite all the recent troubles and negative publicity regarding the ticket sales, we are sincerely hoping this will be the start signal for a wonderfully carefree summer for all those involved. Band, management, fans, oh hell, we’ll even throw in the people at Ticketmaster.

Video of U2’s live performance is available at U2exit.com