Concert ticket, money, and ID. Most people would agree that these are essential items to bring with you to a concert. For a U2 concert, you might consider packing one more “essential” item in your pocket: your U2.com membership card.

Fans in today’s San Diego general admission line laughed when venue security asked them to present their U2.com membership card so they could form a line that will allow them access into the venue before others. 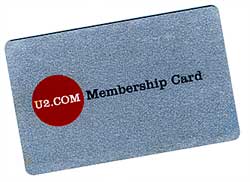 44 thoughts on “Carry the card with you at all times”