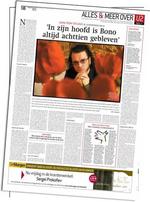 ‘Bono used to borrow my records. When I’d get them back the sleeves would be full of stains.’

Gavin Friday and Guggi are featured in the June 7 issue of Belgian newspaper De Standaard (who also report on Bono’s meeting with EU big wig Louis Michel). Bono’s two ‘best mates’ talked to the paper in Brussels in October, while promoting the re-release of the Virgin Prunes back catalogue on Mute Records.

The two (when Bono’s present, the trio are known as ‘The Funky Trinity’) discuss the miracle of their lasting friendship and success, and their roll as ‘bullshit detectors’: trying to keep their friend’s feet firmly on the ground. Both Gavin and Guggi emphasise the fact that their lives are interwoven with that of U2, even now.

Guggi, whose mediating role makes it possible for the other two sizeable egos to survive next to each other, says:

‘We are the first to hear the new songs and they expect us to comment on them. When they’re working on a new album, we drop by regularly and we go have a few drinks together and talk a lot of bullshit about music. We don’t go easy on each other.’

Gavin thinks the reason the lot of them have remained friends throughout the years is that they’ve never grown up:

‘We’re all still 18 in our heads. We all suffer from a Dorian Gray-complex, a desire for eternal youth. Our bodies tell us otherwise, unfortunately! I suppose it’s our passion that keeps us together.’

So what do their women think of all this male bonding?

‘You know, last year, Bono’s wife Ali told me what our big problem is. She says we love each other too much. I thought she was jealous, she had a few drinks on her. But later I thought: maybe she’s right.’

Disclaimer: Gavin and Guggi’s words are partly translated back into English from the printed Flemish text and reproduced from memory — I spent much of that weekend in Brussels in G&G’s company.