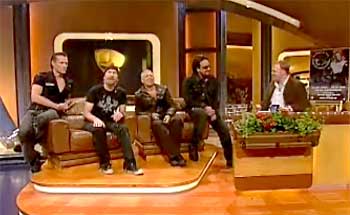 U2 recorded their appearance on Pro7’s TV Total with Stefan Raab on monday (13/6) in Cologne’s Brainpool studios. The band played their single City of Blinding Lights, were interviewed by their host (The Edge brought a present for Raab) and finished with ‘Ein, zwei, drei, vierzehn’ Vertigo. The show was aired in the evening of the same day. Prize quote: “Can I just say something, Stefan… You have to have balls, to shake balls.”

14 thoughts on “A German countdown on TV Total”