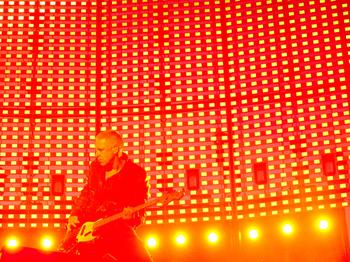 ‘Even with our megalomania, we had never expected these three nights to turn out like they did.’

Near the end of a long, crazy, third Dublin show, Bono thanks the audience for three nights, using his very favourite expression: ‘Extraordinary’.

And they were. We wondered what the band would cook up for night III. Minutes before the show began (half an hour late!), the crew were given the setlist (and by chance, we caught a glimpse of it too – which ruined our surprise, but thrilled us nonetheless). The look on guitar tech Philip Dogherty’s face said it all: ‘Huh?’ ( the setlist as shown to us shortly before start of show )

‘Gloria’, ‘Original of the Species’, ‘Bad’, ‘An Cat Dubh’, ‘Yahweh’ and ’40’ played after the encore of Vertigo and for Dublin: ‘Unchained Melody’ tagged onto the end of ‘One’… too good to be true, but it was. Had the boys been rehearsing on their day off? Gloria sounded as solid as a rock and fit the set perfectly. ‘Original of the Species’ sounded a little tentative, but beautiful.

Bono plucked a little girl wearing a white cowboy hat from the audience during ‘Into the heart’. He took the hat from her, put it on and when he tried to give it back, it got stuck behind his ear piece. The girl, Kira, very patiently untangled her hat from Bono’s wires. A touching moment in a show that tugged at the heart repeatedly.

‘If the children don’t grow up, our bodies get bigger but our hearts get torn up,’ goes the song to which the band take to the stage. It might have been a Virgin Prunes lyric, a coda to the Lypton Village motto to never, ever, grow up.

Children featured heavily this final Dublin show: The Edge had Bono dedicate ‘Yahweh’ to a ‘Bernadette’ of Crumlin’s Children’s hospital and ‘Into the Heart’ went out to Crumlin’s staff. Bono introduced ‘Miracle Drug’ referring to human fragility and our dependance on science, while dedicating the song to its inspiration: fellow Mount Temple student, the author Christopher Nolan and his mother.

Many times during the show Bono let himself go, riding the waves and soaking up the energy coming off the audience, arms spread out, embracing the moment.

These are the moments that become memories for the band, their crew and their fans.

It’s over and out from Dublin from the U2log.com team. We are heading home.