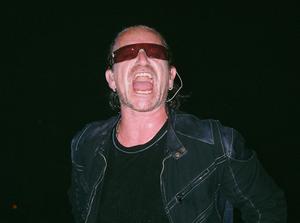 The North American constituency of the U2log.com team has been taking vitamins, exercising daily, and meditating in preparation for the third leg of the Vertigo Tour. We’re physically ready and weirdly excited about queuing for hours outside venues and using our wireless gadgets to provide you with information and images on the road.

With tour rehearsals scheduled in the Ontario capital, plus four sold-out concerts at the Air Canada Centre and the film premieres of I’m Your Man (the Leonard Cohen documentary featuring U2) and Breakfast on Pluto (Neil Jordan’s new feature film starring U2 pal Gavin Friday) at the Toronto International Film Festival happening, we expect Toronto to become U2 Central and for the band members and tour family to be all over the city.

We are particularly excited about reporting from Toronto because it offers the Plus 3 phenomenon, which is the term we use to describe what occurs when U2 perform three or more shows in the same city. U2 get a little a lot goofy — sometimes cocky — on that last night of the string of shows and, as a result, the show can be spectacular. The build-up to that final show usually provides some interesting results as well. Couple the Plus 3 phenomenon with a tour leg opener, and you’ve got the musical equivalent of Girls Gone Wild!

Fans who were unable to get tickets to the Toronto shows, we have good news for you! ETS, the official tour and travel operator for the Vertigo Tour, has just informed us (like, minutes ago) that it has a new allotment of ticket packages for many concerts this fall, including the Toronto shows. Go to ETS’ web site for a chance to get these tickets, which will go quickly. Don’t miss your chance to score the tickets you’ve been wanting.

Photo ©Ruth Barohn/U2log.com (shot at a Plus 3 concert)