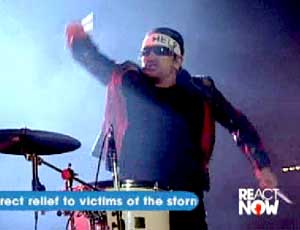 U2 played Love and Peace or Else from the – empty – arena in Toronto. Instead of his usual ‘Co-exist’ bandana, Bono put on one that simply said ‘Help’ and partly changed the song’s lyrics to: ‘Lay down your guns, all you K-marters, all you Americans.’

Video of the performances can be viewed on and downloaded from the MTV website. The site also offers unaired performances by Beck, Trent Reznor (looking more and more like Jools Holland), the Rolling Stones, and others.

34 thoughts on “U2 perform on ReAct Now”