Interscope Records founder Jimmy Iovine attended the show, coming into the ellipse to watch Dashboard Confessional’s opening set. He probably stuck around for the main set too. 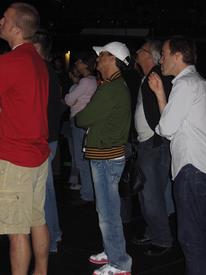 12 thoughts on “Toronto 4: The week ends with disco balls”