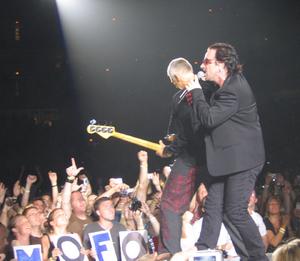 For the first time ever, U2 performed “The First Time” for a Chicago audience last night at the first of their two-night jaunt in the Windy City. The song came as a request from a fan who asked Bono earlier in the day to perform something from Zooropa. The performance was just one of several special treats Chicago fans received — among them, an acoustic performance of “Walk On” (a first for the Vertigo tour) in which Bono failed to remember the lyrics and had to request them on paper; a slick version of “Discotheque,” improved over the Vertigo tour debut in Toronto; and a snippet of another Zooropa song, “Daddy’s Gonna Pay for Your Crashed Car,” at the end of “The Fly.” 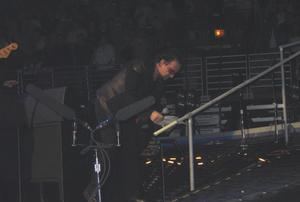