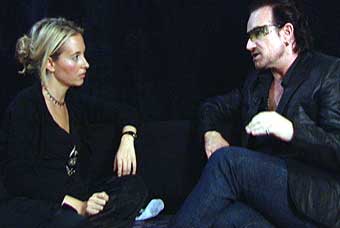 Bono is furious about the G8 outcome, but blames the lack of a movement:

“People say, are you upset after the G8, you didn’t get this, this and this — of course I am. I am furious. But they blame the politicians. I blame us. We don’t have the movement yet.”

Bono talks to Hertz about the results of the G8 summit in Gleneagles this summer and his continuing work as a lobbyist. He also reveals his plans for the new ‘Red-campaign’, which asks companies such as Apple and Nike to produce red coloured products, symbolising the AIDS emergency.

Watch the full interview, recorded backstage at U2’s show in Gothenburg this summer on VPRO Tegenlicht’s website (from September 23).

The interview is part of the VPRO Tegenlicht documentary ‘Noreena’s Agenda’, which will be broadcast on Dutch television on September 25. The full documentary can be viewed online from September 26 onwards, at www.vpro.nl/noreenasagenda