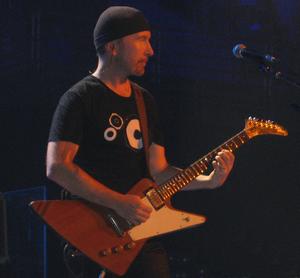 If you ask the people of Milwaukee what goes with U2, they might say “beer.” Much of the fermented beverage was enjoyed at U2’s concert at the Bradley Center in the Beer Capital of the World last night. Glasses were raised as Bono shared with the audience that the day was a special one for U2; it was the band’s birthday. It was 29 years to the day that they met in Larry Mullen’s kitchen and began their musical career.

The most memorable moment of the show came in the first encore, when Bono forgot the lyrics to “Who’s Gonna Ride Your Wild Horses” (or did he forget which song he was singing?). Edge, always the grounded one, rescued the lost singer and set the song on course again.

U2 now have a week’s break before the tour picks up again in Boston on October 3.

14 thoughts on “Milwaukee drinks up U2”