Head, Shoulders, Knees & Toes by Mono with ME2

Kate Bush producer on working with the Edge 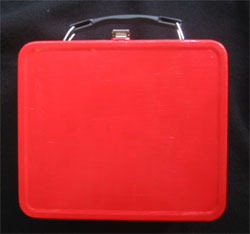 Bono’s design for the Lunchbox Auction to benefit the Food Bank for New York City and the Lunchbox Fund will become available for bidding tomorrow (Friday, Oct. 28) at 6 p.m. PST on the auction site hosted at eBay.

Photos courtesy of the Food Bank for New York City

Walk on lyrics as taped to catwalk

Although somewhat old news, we just learned about it recently and couldn’t help but pass it on. Norwegian entertainer Kristian Valen has done a Bono impersonation that can be found here (look for U2 – Elevation). Kristian has released a DVD, “Valen TV,” containing a U2 impersonation which we believe to be the one featured on the web site, but we have not yet been able to confirm it. For those not fluent in Norwegian, you might want to know that the producer tells Kristian to “stick to the script, and no vulgarity!”

Bono and Robin; seperated at birth